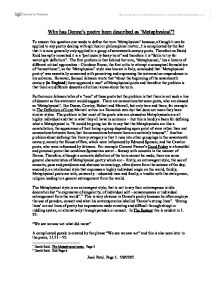 Why has Donne's poetry been described as 'Metaphysical'?

Why has Donne's poetry been described as 'Metaphysical'? To answer this question one needs to define the term 'Metaphysical' because, although it can be applied to any poetry dealing with spiritual or philosophical matter, it is complicated by the fact that it is now generally only applied to a group of seventeenth century poets. Therefore as David Reid has aptly remarked it is a "particularly fuzzy term" and therefore it is "futile to try for watertight definition". The first problem is that behind the term, 'Metaphysical,' lies a history of different critical approaches - Giordano Bruno, the first critic to attempt a conceptual formulation of "concettismo", as the 'Metaphysical' style was known in Italy, concluded that 'Metaphysical poetry' was essentially concerned with perceiving and expressing the universal correspondence in his universe. However, Samuel Johnson wrote that "about the beginning of the seventeenth century [in England] there appeared a race" of Metaphysical poets and therefore the problem is that there are different descents of critical views about the term. Furthermore Johnson talks of a "race" of these poets but the problem is that there is not such a line of descent as this statement would suggest. There are connections between poets, who are classed as 'Metaphysical', like Dunne, Cowley, Hubert and Marvell, but only here and there; for example in The Definition of Love Marvell writes in a Donneish vein but that does not mean they have similar styles. The problem is that most of the poets who are classed as Metaphysicals are all highly individual and that is what they all have in common - but this is hardly a basis for defining what a Metaphysical is. ...read more.

This soul informed, and abled it to row Itself with finny oars, which she did fit, Her scales seemed yet of parchment, and as yet Perchance a fish, but by no name you could call it." (11, 223 - 30) David Reid aptly puts it "Wherever he writes of soul joining body and making at alive, he writes with the sensitivity of someone to who life in the body, which is our only way of being in the world, is strange yet fascinating." Airs and Angels is perhaps one of Donne's most difficult poems, one of the ones Dryden may have had in mind when he stated that Donne "perplexed the minds of the fair sex with the nice speculations of philosophy." It is an obviously Metaphysical poem, for it discusses souls and bodies and suggests the contemporary theory that angels make themselves into bodies of air in order to appear to men. Here he again explains how love will mysteriously connect the lovers when they are apart. He imagines metaphysically, he imagines spiritual or supernatural states of being because he is telling his love she is an angel, for "Angels affect us oft, and worshipped be". Donne's love poetry frequently overturns earthly limitations, as souls may unite lovers who are physically separated. For Donne love poetry performs all sorts of miracles in contracting or expanding space and time; for example in The Good - Morrow - "For love, all love of other sights controls, And makes one little room an everywhere." ...read more.

This combination of the worldly and the public, the general and the particular is a theme found in most Metaphysical works. Donne was born a Catholic when Catholics were seen as the enemies of the state and this thwarted his attempts to fit into public life. His mother came from the heroic wing of English Catholicism - she was the grandniece of the Catholic martyr Sir Thomas More and her two brothers became Jesuits. She was a known recusant at a time when non - conformists were fined a hundred marks for attending mass and twenty pounds a month for refusing to attend Anglican Church services. The Catholics hated being a source of revenue for the government and the pervasive system of government spies and this is evident in Satire 1V, 11 214 - 17- "Ten Cardinals into the Inquisition; And whispered "By Jesu", so often, that a Persuivant would have ravished him away For saying of our Lady's psalter, but 'tis fit" The fact that Donne's family was divided, his father and first step - father preferring to conform to the new religion and his mother being more willing to take risks for her faith, may have been the reason why Donne separated himself from the religion he was born into and became a Protestant. Satire 111 is a personal inquiry into Donne's search for the true religion and points out the route of vai media, the middle way. John Carey believed that the religious references in Donne's poetry reflected the neurotic guilt of someone who was not strong enough to break with the religion he was born into. ...read more.