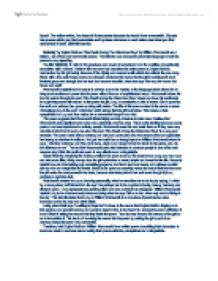 Why I beleive that 'She Dwelt Among the Untrodden Ways' by William Wordsworth and 'Muliebrity' by Sujata Bhatt are memorable poems.

Ques1. The editor writes, 'he chose all these poems because he found them memorable'. Choose two poems which you find memorable and by close reference to each make clear what you find memorable in both. (500-600 words) Muliebrity' by Sujata Bhatt and 'She Dwelt Among The Untrodden Ways' by William Wordsworth are, I believe, two of the most memorable poems. The effective use of powerful yet simple language in both the poems is very appealing. The title 'Muliebrity' is Latin for the greatness and power of womanhood and the qualities conventionally associated with a woman. I believe this one word has described the entire poem as, Sujata Bhatt is mesmerized by this girl mainly because of the dignity and reverence with which she collects the cow dung. Bhatt, with a few well-chosen words and phrases convinces the reader that the girl is working with such feminine grace and strength that her task has become beautiful, when she says 'the way she moved her hands and waist'. ...read more.

This poem suggests that Wordsworth thinks highly not only of nature but also man. I believe that Wordsworth sees significance in every man, especially common ones. This is quite startling because usually poets do not see importance in ordinary people. Wordsworth sees this and treats them as if they were very valuable to him if not to every one else. His poem 'She Dwelt Among the Untrodden Ways' is a very good example. This poem deals with an ordinary and obscure country lass who has almost nobody to appreciate her beauty as she lives in solitude. And yet her death has a strong impact on William Wordsworth when he says, ' she lived unknown, and few could know, when Lucy ceased to be; but she is in her grave, and, oh, the difference to me'. The fact that Wordsworth paid extra attention to common people is one of the main reasons why I think this particular poem is very effective and unforgettable. ...read more.

William Wordsworth depicts Lucy to be a tremendously treasured being when he says 'fair as a star, when only one is shining in the sky'. This also illustrates that Lucy, to William Wordsworth is a rare piece of jewel whose value increases as it is the only one which exists. Lastly when Bhatt says "unwilling to forget her' it shows to the reader that Sujata Bhatt is clinging on to this precious and special memory and wants to keep it close to her heart. By leaving the poem unfinished it is as if Bhatt is telling the readers that they finish the poem. Thus she has handed the memory of the girl so as to immortalize it. This touch of involving the reader into the poem by making the girl a part of our memory makes this poem very memorable. Therefore, both Sujata Bhatt and William Wordsworth have written poems describing their characters to transcend what is mundane hence making their poems effective, exceptional and unforgettable. ...read more.