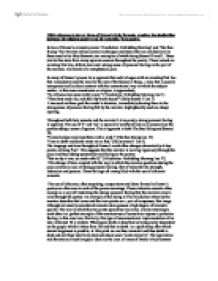 With reference to two or three of Donne's Holy Sonnets, consider the similarities between his religious poetry and his romantic / love poetry.

With reference to two or three of Donne's Holy Sonnets, consider the similarities between his religious poetry and his romantic / love poetry. In two of Donne's romantic poems 'Valediction: Forbidding Morning' and 'The Sun Rising' The Narrator utilises several techniques and styles that are not dissimilar to those used in his Holy Sonnets ,two examples of which being Sonnet 10 and 1. These similarities stem from many separate sources throughout the poetry. These include an arresting first line, defiant tone and a strong sense of personal feeling on the part of the narrator, a hallmark of a metaphysical poet. In many of Donne's pieces its is apparent that each is begun with an arresting first line that immediately sets the tone for the rest of the Sonnet or Song , a tone that is usually unexpected and in direct contrast with the conventional way in which the subject matter , in this case romanticism or religion, is approached; "As virtuous men pass mildly away," (Valediction: Forbidding Morning line 1) "Thou hast made me, and shall thy work decay?" (Holy Sonnet 1 line 1) ...read more.

Similarly, this type of unconventional implementation of an idea in Sonnet 10 is evident. Whereupon death is described as being purely dependant on the people which it takes from life and that as death is a quick sleep after which eternal happiness is possible, at this point we are thus immortal and thus death is dead and not those who have died and whose souls 'wake eternally'. The application and formation of such irregular ideas are the crux of many of Donne's holy sonnets and love poems; the use of these elaborate conceits is often in direct contrast to the strict structure that Donne follows when creating both his Sonnets and songs. Throughout Donne's poetry, one observes a strict Rhyme structure and technique. This contrast to the unconventional ideas projected through the poetry keeps the reader interested upholding a sense of respect for the narrator in addition to illustrating a degree of Donne's respect for the technical disciplines required in poetry; "Why does thou thus, Through windows, and through curtains call on us?" (The Sun Rising - lines 2-3) "I run to death, and death meets me as fast, And all my pleasures are like yesterday;" ( Holy sonnet 1- lines 3-4) ...read more.

This may also give rise to the more unorthodox ideas and comparisons utilised in the poetry as the narrator feels comfortable form a position of power to relate them to the reader; "Thou hast made me, And shall thy work decay? Repair me now, for now mine end doth hast," this arresting first line form sonnet 1 shows the way in which Donne's tone adjusts itself to command and question God a practise that with out these first lines would lead to the narrator becoming humbled and losing the intensity of the sonnet. In conclusion, it is clear that there are a many distinct similarities between Donne's love poetry and holy sonnets. These stem from the intensity of feeling that Donne injects into all of his work. Whether speaking to of lover or to God, Donne's feelings seem to revolve around his anxieties; he masks these with an arresting confidence throughout. The degree to which Donne's holy sonnets and love poetry are similar is high in that the narrators, in each case, use of fresh unrestrained thought through elaborate conceit leading to keen sense of personal feeling tied down in a strict tension built structure does not vary greatly between the two sets of poetry. Thus, John Donne is similar mind and soul. Toby Roberts 12y1 ...read more.