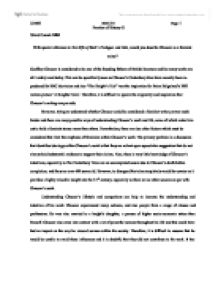 With special reference to The Wife of Bath's Prologue and Tale, would you describe Chaucer as a feminist writer?

Word Count: 2484 With special reference to The Wife of Bath's Prologue and Tale, would you describe Chaucer as a feminist writer? Geoffrey Chaucer is considered to be one of the founding fathers of British literature and his many works are still widely read today. This can be specifically seen as Chaucer's Canterbury tales have recently been re-produced for BBC television and also "The Knight's Tale" was the inspiration for Brian Helgeland's 2001 motion picture 'A Knights Tales'. Therefore, it is difficult to ignore the originality and inspiration that Chaucer's writing can provide. However, trying to understand whether Chaucer could be considered a feminist writer proves much harder and there are many possible ways of understanding Chaucer's work and life, some of which make him out to hold a feminist stance more than others. Nevertheless, there are also other factors which must be considered that limit the emphasis of feminism within Chaucer's work. The primary problem in a discussion that identifies ideology within Chaucer's work is that they are reliant upon speculative suggestion that do not always hold substantial evidence to support their claims. Also, there is very little knowledge of Chaucer's intentions, especially as The Canterbury Tales are an uncompleted source due to Chaucer's death before completion, and they are over 600 years old. However, to disregard the tales completely would be unwise as it provides a highly valuable insight into the 14th century, especially as there are no other sources on par with Chaucer's work. Understanding Chaucer's lifestyle and occupations can help to increase the understanding and intention of his work. ...read more.

The relationship between the Wife of Bath and Jenkins, her fifth husband, provides an attention-grabbing account of an extremely male centric and anti feminist character that loses mastery to his wife by using violence against her. Although, within this account we learn she is overtly manipulative with her husbands. To bring about her aims the Wife is required to use her sexuality as a weapon against her husbands in order to shame them into providing for her. Therefore, the prologue is open to interpretation as it can be viewed in many ways. It prompts a feminist side via the wife struggling to use her abilities to achieve her own goals within the rigid patriarchal framework. However, it can alternatively be viewed as a warning to men and a comedy about the treatment of men being exploited by the cunning of women. The tale continues to focus upon the issue of mastery by the use of a fable set in Camelot. The fable opens with the feminist issue of rape. However, Chaucer plays little attention to that and also the Knight is not overtly punished for raping a woman. Nevertheless, this may have little to do with Chaucer not wanting to provide a feminist account over the issue of rape, as it must be noted that rape was not regarded as it is in today's society. The way in which the fable seeks justice for the knight does provoke a feminist view of Chaucer's work as the justice is issued by a Queen and also the Knight's punishment provides a feminist moral to the tale. ...read more.

Also, unlike science or religion, literature does not give explanations as to its original intentions and it does hold a certain amount of ambiguity, and of course, interpretation is left open to opinion. Although this can be difficult to gauge and can prove problematic when substantiating with evidence, it does mean that Chaucer was attempting to give women a voice even if its accuracy is considered to be flawed. Subjectivity is the key to understanding Chaucer and it is near impossible to come to a definitive conclusion as to whether he was a feminist writer or not, and the main arguments concerning this have been identified. It is extremely difficult to analyse Chaucer's work as when doing so you are have forced to remove a 21st century understanding of feminism and feminist writing and constantly you are having to place analysis in its historical context. The concept of Chaucer's life imitating art can also be seen, as he is keen to demonstrate many attitudes and philosophies that were new to his period, especially as he had seen change his own personal life as Chaucer is an example of the increasing social mobility. Nevertheless he would be unable to move past the rigid basis for which women were understood and provide coherent feminist arguments. Ultimately it is difficult to believe that the reason why Chaucer wrote his texts were to promote feminism and be studied in this way. Confusion and conflict within the time at which the tales were written also needs to be considered as these could have appeared as a manifestation of feminism due to the change in opinions and society as a whole at that time. ...read more.