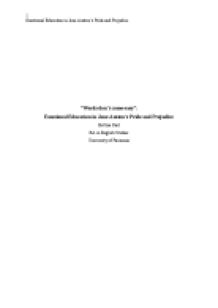 ï»¿Emotional Education in Jane Austen’s Pride and Prejudice “Words don’t come easy”: Emotional Education in Jane Austen’s Pride and Prejudice Bettina Rad BA in English Studies University of Pannonia Author’s note: Faculty of Modern Philology and Social Sciences Institute of English and American Studies Consultant: Dr. Andrea Szabó F. Abstract This study sets out to investigate non-verbal communication, generally underestimated, with a view to the theme of emotional education in Jane Austen’s Pride and Prejudice. I claim that body motions, paralanguage and self presentation occupy a pivotal role in how Austen’s heroine teaches her hero to express his emotions, faithful to the novel’s generic indebtedness to the female gothic romance. First, I will give the definitional framework of my analysis relying on G.W. Porter’s theory of nonverbal communication. Second, I introduce the categories of physical and aesthetic nonverbal communication. In the next section I provide a close reading of the nonverbal interactions of Austen’s main characters, such as body-language, gestures, postures, music, and dancing. As a conclusion, I claim, that nonverbal communication proves to be an integral part of the novel’s discourse; no wonder, it has served as a blueprint for generations of readers in “speaking without words”. “Words don’t come easy”: Emotional Education in Jane Austen’s Pride and Prejudice Introduction Most people tend to underestimate the importance of nonverbal messages in communication –an area, which should receive more particular attention – as opposed to the fact that it penetrates our whole life and has a crucial role in social situations. The purpose of this thesis is to come up with an interesting problem in connection with late 18th and early 19th century fiction including Jane Austen’s Pride and Prejudice. The heroine Elizabeth is someone who becomes a role-model in the eyes of the reader with all her actions and emotions; therefore it is really interesting to analyze the details of her behaviour, her “communication without words”. ...read more.

It created a tradition lasting until now. Various paintings could be mentioned which illustrate how important role the piano played in these ages. For instance, Santiago Rusiñol’s oil-panting called “A romance” shows the piano as an inevitable piece in parlours (Székely, 2000, p. 6-80) and (Szabolcsi, 1963, p. 23-84). In my thesis I argue that playing music is like sending a “message” to the other person meaning that sounds can show different kinds of feelings so it can be regarded as an artistic expression not transmitted by words. There is no doubt that music is considered to be a “very innocent diversion” in this age and it is obvious that people devote a lot of their time to it. “In music feelings, emotions and even a view of life itself are projected from the performers to the listeners by its tempo and mood. Even the choice of instruments communicates the feelings of the composers,” (Porter, 1969, p. 6). Dance is one of the recurrent motifs, which appears regularly in the novel, especially on the occasions of social meetings. G. W. Porter pointed out in his article that dance can portray different emotions like hope, fear, joy and sadness and it can be regarded as a “creative communication medium” which is not easy to understand by everyone. The art of dance is the “impinging on communication through body movements,” (p. 6). Part 2. Practical Part 2.1. Physical type of nonverbal communication 2.1.1. Eye contact As a beginning, the importance of eye contact is examined through the novel which can convey many meanings like affection and love. One often comments on “looks that could kill”, while when someone tries to influence another person, they usually maintain better eye contact, but several other examples could be mentioned. The significance of eye-contact can be demonstrated by various examples. The first occasion for interaction in Pride and Prejudice is settled at the ball at Meryton: “Which do you mean? ...read more.

Their conversation seems to be a little unnatural because they are under the pressure of saying something. Their speech is instantly broken by intermittent pauses when they cannot utter a word and this way they are forced to try to find out the thoughts of each other (p. 133-136). The silence ? as it was mentioned ? here functions as an instrument that conveys meaning. To sum it up, dancing here can be associated with the process of courting in which both parties are making steps towards the other and this can be understood as a road to emotional recognition. Conclusion In the problem of how to teach a man to express his feelings non-verbal communication seems to occupy a crucial role, however most people do not attach too much significance to the issue. The thesis considered and listed the main points of this type of communication in order to highlight the impact it has on emotional development. Body motions appeared to be the most effective motivating power in the education of the man. Eye contact and smile were proven to go together with the so-called halo effect meaning that most of the later reactions were based on these first impressions, so they are the ones that have a dominating function. Creative expressions including playing music and dance were the next goal of the thesis to analyze. Despite the fact that these are not so easy to speak about in connection with their effectiveness in communication as being highly volatile, these are also important to be taken into consideration for the reason that this way they may get a deeper meaning. Playing music was not only used to pass time, balls were not just a kind of tradition but they were proven to serve other functions like artistic way of communication. To sum it up, the book encourages people for self-examination and offers help to understand their life, but it also provides guidelines to change their self and also their environment for the better. ...read more.