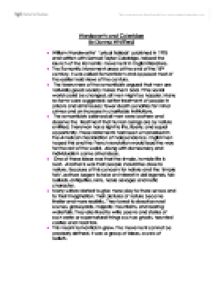 Wordsworth and Coleridge By Donna Whitfield * William Wordsworths' 'Lyrical Ballads' published in 1978 and written with Samuel Taylor Coleridge, helped the launch of the Romantic movement in English literature. * The Romantic Movement arose at the end of the 18th century. It was called Romanticism and opposed most of the earlier held views of the century. * The forerunners of the romanticists argued that men are naturally good; society makes them bad. If the social world could be changed, all men might be happier. Many re-forms were suggested: better treatment of people in prisons and almshouses; fewer death penalties for minor crimes and an increase in charitable institutions. * The romanticists believed all men were brothers and deserve the treatment that human beings are by nature entitled. Everyman has a right to life, liberty, and equal opportunity. These statements had been emphasised in the American Declaration of Independence. Englishmen hoped this and the French revolution would lead the way for the rest of the world. Along with democracy and individualism came other ideas. * One of these ideas was that the simple, humble life is best. Another is was that people should live close to nature. ...read more.

* He was a major 19th Century English lyrical poet. * He had a tendency to daydream- a weakness, like his later drug addiction, which limited his work. * These reveries however, inspired the exotic imagery that made his poetry so haunting. * Coleridge's daydreams were affected by the use of opium, which he started taking to relieve the pains of neuralgia. This addiction created problems for the poet and is believed by some to have made his work much less than what it might have been. His imaginative power is expressed in his dream poets- 'The Rime of the Ancient Mariner', 'Christabel', and 'Kubla Khan,' the most famous unfinished poem to date in the English language. Coleridge claimed that "Kubla Khan" was the product of a hallucinatory dream experienced after he had taken opium" in consequence of a slight indisposition". On awaking, he began to commit the experience to paper, but was interrupted by "a person on business from Porlock". On returning to his desk, he found that the intensity of his impressions had faded. The poem claims to be "scattered lines and images" from a longer, forgotten work. * In 1797 when Wordsworth moved into Alfoxden Street, Sommerset. ...read more.

Matthew Arnold wrote, "Wordsworth's poetry is great because of the extraordinary power with which Wordsworth feels the joy offered us in Nature, the joy offered us in the simple affections and duties" * Wordsworth lived to see his work universally praised. In 1842 he was awarded a government pension, and in the following year he succeeded Southey as Poet Laureate. Wordsworth died at Rydal Mount, on April 23, 1850, and was buried in the Grasmere churchyard. 1776- American Declaration of independence from Britain. 1789- Outbreak of the French Revolution 1793- Revolutionary government in France declared War on Britain. 1799- In France, Napoleon overthrew the dictionary 1802- Britain made peace with France after the War between them. 1805- Battle of Trafalgar- Royal Navy 1815- Battle of Waterloo, Britain and Allies defeat France. 1829- Greek Kingdom established 1830- July Revolution in France, Louis Phillippe replaced Charles X 1832- Great Reform Act the Reform Bill of 1832 provided for the redistribution of parliamentary seats, and virtually tripled the electorate. 1848- In February Revolution Louis Philippe was over thrown and the second revolution Louis Philippe was over thrown and the second set up. 1852-1870 Louis Neapolitan, Naepolian's first nephew, restored the empire with the title- Naepolian the III Kings in Reign George III 1760-1820 George IV 1820 - 30 William IV 1830-7 ...read more.