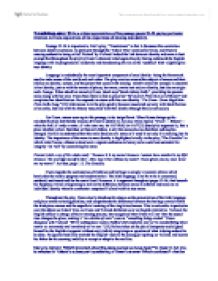 Write a critical appreciation of the passage pages 52-56 paying particular attention to Friels exploration of the importance of naming and identity.

Translations essay: Write a critical appreciation of the passage pages 52-56 paying particular attention to Friels exploration of the importance of naming and identity. Passage 52-56 is important to Friel's play, "Translations" in that it discusses this correlation between identity and name. In particular through the 'Tobair Vree' naration by Owen, and Owen's ensuing outburst to being called 'Roland' by Yolland. Indeed the link between identity and name is best exemplified throughout the play by Owen's character who begins the play having embraced the English language with its progressional modernity and abandonning his ties to the 'outdated' Irish- slightling his true identity. Language is undoubtedly the most important component of ones identity- being the framework used to make sense of the world and each other. The play revolves around the subject of names and their relation to identity, culture, and the power that comes with naming. Sarah's name for example is essential in her identity, just as with the names of places; her name, carries not only an identity, but also an origin and a lineage. ...read more.

The Irish language, is as far as he is concerned, outdated, outclassed and for the uncivilized. However, it is apparent throughout pages 52-56, that beneath his flippancy, Owen is beginning to realize the difference between name as referent and name as an individual identity when he confronts a surprised Yolland with his true name. Throughout the play, Owen slowly abandons his stance on the preservation of the Irish language and place names as being pointless, and comprehends the difference between the heritage carried within the Irish place-names and the superficial marking of the Anglicized names. This is noticeable in particular over the debate on Tobair Vree, as Owen and Yolland deliberate over an English alternative. Yolland- the English officer in charge of the re-naming process, has recognized what Owen will not- that the sound also changes the place, making it "an eviction of sorts" even as "something being eroded." Owen disagrees with Yolland: "We're taking place-names riddled with confusion and we're standardising those names as accurately and sensitively as we can." ...read more.

Translation closes off rather than discloses the past hidden within the original name. Tobair Vree or Brian's Well is certainly not a well of any significance to Ireland or even Ballie Beog, but its name holds a link to the past, a heritage buried deep within its name which is lost in the English translation. Through this small passage, Friel concludes that there is more to a name than just a reference. In Ireland's place-names, the presenting of a name to a location establishes a relationship between the word and the place unlike the simple referent the English would have applied. Where is the meaning behind a name such as ''Swinefort''? The place-name should never be reduced to a referential function only and it should be recognized that with every place-name there is identification in the form of historical, social and cultural referral, tied up within it. Friel reveals through this scene that the loss of such knowledge - the loss of the Irish names results in reducing the identity of Ireland and thereby loses part of the culture which composes Ireland's individuality and uniqueness. ...read more.