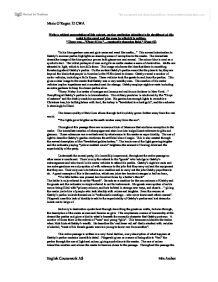 Write a critical appreciation of this extract, paying particular attention to its significant at this point in the novel and the ways in which it is written.&quot;There was&amp;#133;&quot;(Page 41) to &quot;&amp;#133;constantly changing light.&quot; (Page 42)

Write a critical appreciation of this extract, paying particular attention to its significant at this point in the novel and the ways in which it is written. "There was..."(Page 41) to "...constantly changing light." (Page 42) "In his blue gardens men and girls came and went like moths..." This surreal introduction to Gatsby's summer parties highlights an alarming sense of corruption to the reader. The immediate dreamlike image of the blue gardens proves both glamorous and surreal. The colour blue is used as a symbolic tool. The initial portrayal of men and girls as moths creates a sense of destruction. Moths are attracted to light, which in turn kills them. This image reinforces the idea that there is something threatening about Gatsby's parties. On the surface Gatsby's parties seem like the place to be; they are beyond the ideals that people in America in the 1920s dared to dream. Gatsby owned a number of motor vehicles, including a Rolls Royce. ...read more.

Gatsby's eight servants and one extra gardener are only spoken of with reference to the jobs that they carry out and the equipment that they use. Their only use is to behave as a machine and to carry out the jobs Gatsby pays them to do. A good example of this is the machine, which can juice two hundred oranges in half an hour, "If a little button was pressed two hundred times by a butler's thumb" The butler is only referred to as the "thumb". He acts as a machine for the convenience of Gatsby and his guests and the orchestra is simple referred to as the instruments. His guests were spoken of as his rooms being filled with "primary colours, and hair bobbed in strange new ways, and shawls..." giving the reader just a blur of people who lack identity with voices and laughter. Even the women at Gatsby's parties include themselves in "enthusiastic meetings...who never knew each others names". ...read more.

Perhaps Fitzgerald is attempting to display to the reader that Nick admires Gatsby for his lavish lifestyle. The language used throughout proves dreamy, but still shows a crack of destruction, for example, "men and girls..." The frequent mention of Gatsby's motor vehicles and motorboats suggests the constant movement of Gatsby's residence. Even if the parties are not happening, the servants are cleaning or the fruit is being delivered from New York, then being thrown away once used. The movement in Gatsby's parties could consist of the orchestra arriving or people coming in from the beach. "The groups change swiftly, swell with new arrivals, dissolve and form the same breath..." The people with no identity are constantly changing which Fitzgerald so precisely describes as the "sea-change of faces and voices..." This gives the exact idea of just how many guests who are merely another sound and space in Gatsby's parties. This ironically reflects the need for change through which Gatsby lives his life as dreams being held together by his "prodigality" which can only ever be over shadowed by his true character. Words: 1075 Marie O'Regan 12 CWA English Coursework AS Mrs Archer ...read more.