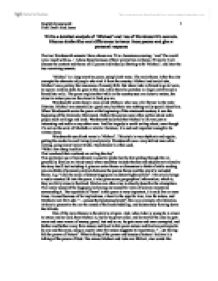 Write a detailed analysis of 'Michael' and two of Wordsworth's sonnets - Discuss similarities and differences between these poems and give a personal response.

Write a detailed analysis of 'Michael' and two of Wordsworth's sonnets. Discuss similarities and differences between these poems and give a personal response The two Wordsworth sonnets I have chosen are 'It is a beauteous evening..' and 'The world is too much with us..'. I chose these because of their similarities in theme. Primarily I will discuss the content and theme of all poems individually. Starting with 'Michael', and later the two remaining sonnets. 'Michael' is a long narrative poem, using blank verse. The main theme is that the city corrupts the character of people who visit it from the country. Michael and early Luke, Michael's son, portray the innocence of country folk. But when Luke is forced to go to leave, to repay a relation debt, he goes to the city, while there he partakes in illegal activity and is forced into exile. The poem explains that while in the country you are closer to nature, the closer to nature you are the closer to God you are. Wordsworth wrote about a man called Michael, who was a hill farmer in the Lake Districts. Michael was essentially a good man, but there was nothing really special about him. When Wordsworth wrote the poem at the beginning of the nineteenth century it was the beginning of the Romantic Movement. Before this poems were often written about noble people such as Kings and lords. Wordsworth believed that Michael's life was just as interesting and noble as any other man. And his tragedy is worth writing about, even though it's not on the scale of Macbeth or similar literature, it is sad and important enough to be written about. Wordsworth uses blank verse in 'Michael'. ...read more.

Starting the line with 'listen'. With sound a strong theme arises; nature is everlasting, people die, ho uses crumble, and cars break down, but nature prevails. This theme is introduced through the form of the sea. Which is personified by "...the mighty being...", it's continued existence is displayed by the words 'eternal' and 'everlastingly'. Here is the Volta, again changing the emphasis, from the view to the child, this major shift in emphasis is purposely put here, since in after Volta the story is given, in the octave the situation is described. In this line we find out the child is a female child, it explains even though the child doesn't think of God, "Untouched by solemn thought", it doesn't mean that she is therefore less 'divine'. This sonnet, in my view, is very effective; it succeeds to portray a beautiful evening, with the red musty light reflecting off the shimmering cold sea. It succeeds by using words like 'beauteous', 'calm', 'sun', 'tranquillity' and 'thunderous'. The rhyme, in my judgment, is not effective, it doesn't satisfy any particular job, and other than creating a slight sense of harmony, it doesn't contribute to the final product. I enjoyed this reading this poem, it evokes many emotions, the sun being happiness and tranquillity, thunder being fear and strength. It also transfers the message clearly, I thoroughly enjoyed this sonnet. The next poem I will discuss is 'The world is too much us...'. Again, it is a sonnet, and it does follow the rules. It a sonnet about Wordsworth's personas views about modern society, well modern when it as written anyway. ...read more.

Wordsworth believes that nature is all-good, and, as the oak tree in 'Michael', it persists to live on, even after all the ruminants of Michael, Isabel and Luke have gone. From nature we can learn to be good people, to be calm and aware of our beautiful surroundings, and so, aware of God. In the city we think of only money, lust and greed. I find all the poems to be enjoyable and quite entertaining. They also express Wordsworth's philosophy in very simple stories. The stories are all assumed by me to be true, due to the use of names of places, and their correct detailed descriptions. All poems are similar in theme, using love, nature and God as prominent aspects. My favourite poem is 'It is a beauteous evening..', a sonnets format is very attractive to the ear, with regular rhyme and beat. The theme is very relaxing and beautifully written, words like 'calm', 'quiet', 'nun' and 'gentleness' are all used, they give a loving image of nature and people. Using contrast between words also evokes emotion, such as 'thunder' to describe the rowdy sea. The moral of the sonnet a good one too, it is introduced in the sestet, while the octave describes the surroundings and the mood. In the sestet it describes a girl who, despite appearances, is as close to God, and appreciative of nature as her companion is. For all these reasons, in my personal opinion, I believe 'It is a beauteous evening..' is best at sending over it's message, while also giving entertainment, though I thought all were very good. 1 English Coursework Final Draft-Aled Jones ...read more.