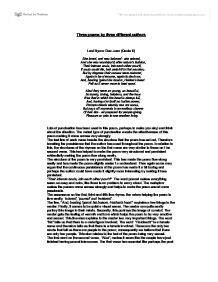 Write an essay in which you identify, describe and evaluate the main ideas in at least three poems by diffrernt authors.

Three poems by three different authors Lord Byron: Don Juan (Canto II) She loved, and was beloved - she adored, And she was worshipp'd; after nature's fashion, Their intense souls, into each other pour'd, If souls could die, had perish'd in that passion,- But by degrees their senses were restored, Again to be o'ercome, again to dash on; And, beating 'gainst his bosom, Haidee's heart Felt as if never more to beat apart. Alas! they were so young, so beautiful, So lonely, loving, helpless, and the hour Was that in which the heart is always full, And, having o'er itself no further power, Prompts deeds eternity can not annul, But pays off moments in an endless shower Of hell -fire - all prepared for people giving Pleasure or pain to one another living. Lots of punctuation has been used in this poem, perhaps to make you stop and think about the situation. The varied type of punctuation excels the effectiveness of this poem making it come across very strongly. The last line of each verse breaks the structure that the poem has set out, Therefore breaking the persistence that the author has used throughout the poem. In relation to this, the structures of the rhymes on the first verse are very similar to those on the second verse. ...read more.

The first verse has seemed to praise the female and make her seem like a special person. The second verse proves slightly differently. The use of the exclamation mark on the second line on the second verse, "A Spirit, yet a Woman too!", projects to the reader that the poet is somewhat surprised that she is in fact a woman. This may be to express the metaphor on the first verse, the assumption that he is portraying her as an angel. Then again he may be insulting her, referring to the way that she looks. The third line on the second verse, "Her household motions light and free", make the reader think that perhaps the poet is talking about the way she walks/acts. He may be saying that she walks gracefully and beautifully then again he may be saying that she has nothing. He may be making the assumption that she is in fact poor and has nothing hence walking, "light and free". The seventh and eighth line on the second verse, "A creature not too bright or good For human nature's daily food', is a long metaphor. The female is not in fact a creature nor is she food for a human. The poet may be trying to relate to what someone has to deal with. ...read more.

The last line of the third verse makes the reader think that perhaps she is starting to be sexual herself, as though she has given herself into the man, "And then - I started - too". The first line of the fifth verse on the other hand, sounds as though she is trying to escape from him, "And he - he followed - close behind". The repetition used is the only repetition used in the poem and portrays the image that she is scared. "His silver heel" and "overflow with pearl" may also have some sexual meaning, yet some may argue that it is simply the sea flowing on her and the 'pearl' would relate to the foam from the sea. The last verse tells us that she has reached safety, "meet the solid town". The word 'solid' emphasises that she has reached the town, therefore perhaps giving the reader a sign of relief. The third line on the last verse states that the sea headed off "bowing - with a mighty look". Some may argue that he is acknowledging his opponent because he has bowed to her, though we know that the sea has not actually bowed, the poet is using a metaphor. Many may argue that this poem is in no way sexual whatsoever but is in fact interpreting the possibility that the female has a phobia of the sea and therefore the poet has written this poem to make the reader read in between the lines. ...read more.