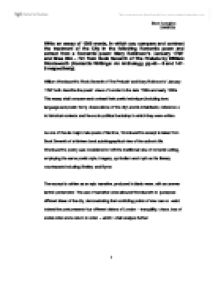 Write an essay of 1500 words, in which you compare and contrast the treatment of the City in the following Romantic poem and extract from a Romantic poem: Mary Robinson's 'January 1795' and lines 624-741 from Book Seventh of The Prelude by William Wordswo

Write an essay of 1500 words, in which you compare and contrast the treatment of the City in the following Romantic poem and extract from a Romantic poem: Mary Robinson’s ‘January 1795’ and lines 624 – 741 from Book Seventh of The Prelude by William Wordsworth (Romantic Writings: An Anthology, pp.45 – 6 and 147-9 respectively).

William Wordsworth’s ‘Book Seventh of The Prelude’ and Mary Robinson’s ‘January 1795’ both describe the poets’ views of London in the late 1790s and early 1800s.  This essay shall compare and contrast their poetic technique (including tone, language and poetic form); observations of ‘the city’ and its inhabitants; references to historical contexts and the socio-political backdrop in which they were written.

As one of the six major male poets of his time, Wordsworth’s excerpt is taken from Book Seventh of a thirteen book autobiographical view of the author’s life. Wordsworth’s poetry was considered to fulfil the traditional view of romantic writing, employing the same poetic style, imagery, symbolism and myth as his literary counterparts including Shelley and Byron.

The excerpt is written as an epic narrative, produced in blank verse, with an uneven iambic pentameter. The use of narrative verse allowed Wordsworth to juxtapose different ideas of the city, demonstrating that conflicting points of view can co-exist. Indeed the poet presents four different visions of London - tranquillity, chaos, loss of social order and a return to order – which I shall analyse further.

In the first section of this extract (lines 624-642) Wordsworth celebrates the tranquillity of the city streets at night. He uses metaphor to compare human-life to a tide that ‘stands still’ (line 631).  This peacefulness is echoed in lines 634-635:

‘The calmness, beauty of the spectacle;

Wordsworth employs an alliterative technique, repeating the letter ‘s’ to produce an audible swishing sound akin to the sea lapping against the shore, inducing an idyllic sound of calmness.

From line 642 a change occurs as the poet challenges this romantic view of London ‘things that are, are not’.  In lines 645-649 Wordsworth directly addresses the reader, asking how they will react ‘To times when half the City shall break out…To executions, to a Street on fire, / Mobs, riots or rejoicing?’  Wordsworth’s personal experience of the French Revolution is apparent here.  He cannot understand how anyone could rejoice in such a situation of chaos and unrest.

Wordsworth goes onto compare revolution and the ensuing chaos to the atmosphere of St Bartholomew’s fair in London.  Unable to describe it and fearing the bedlam within the city, he calls upon the help of a Muse (feature of traditional romanticism) to distance him from the ‘press and danger of the Crowd’ (line 658).   Now as a remote and protected spectator, Wordsworth unfolds the horror of the fair in a Milton like description of hell, encapsulated in lines 659-662.  The poet’s choice of words, for example ‘hell’, ‘anarchy’, ‘Barbarian’ and ‘Monstrous’, in conjunction with the overt use of exclamation marks produces a feeling of fear and alarm.  The reference to ‘what a hell / For eyes and ears’ in lines 658-659 and the use of alliteration ‘shape, sight and sound’ in line 662, creates an audible and visual attack to depict the impact the fair can have on one’s sensory perception.

These feelings of confusion and anxiety are continued in lines 668-695 as Wordsworth randomly shifts from image to image.  By listing these images one after another, in quick succession, the poet produces the effect that the sights of the fair are too much to comprehend.  The hyphen at the beginning of line 680 extenuates the macabre images that follow; ‘The Horse of Knowledge’ and ‘The Bust that speaks’.  Through the depiction of these ‘freaks of Nature’, Wordsworth suggests that the ‘Promethean thoughts’ of the people of London has created a ‘Parliament of Monsters’ which could lead to political revolution through chaos and corruption of the city.

Wordsworth’s despair at the loss of social order in London is highlighted in line 696 through the use of a spatial pause and an exclamation mark ‘O blank confusion!’  He feels unable to defend the city and claims the lack of social order has ‘melted and reduced’ everyone ‘To one identity, by differences / That have no law, no meaning, and no end; ’  (lines 704-706).  Wordsworth pertinently moves himself away from this scene of hopelessness and anguish to focus on the ideals of traditional romanticism.  References to his education, ‘works of God’ and nature (the steadfastness of the mountains) from line 708, presumably provide the poet with a means of quiet contemplation and salvation. It is only then that Wordsworth feels able to conclude that despite his previous despair, he feels the destroying of society’s natural order will give way to ‘Composure and ennobling harmony’ in the city and subsequently in Man.

Mary Robinson could be described as one of the most forgotten female writers of English Romanticism, her literary achievements over-shadowed by her personal notoriety. Robinson’s poetry did not fulfil the traditional view of Romanticism as she was a woman, writing about the socio-historical issues of her time. Robinson satisfies the revised view that Romanticism is ‘the writing of a particular period’ (Romantic Writings, p271) as opposed to a ‘certain kind of writing’ (Romantic Writings, p45).

In contrast to Wordsworth’s excerpt from Book Seventh, January 1795 is a short, complete piece of poetry.  Rather than the blank verse and epic narrative, favoured by Wordsworth, January 1795 is written in eleven stanzas containing four-line quatrains.  Each stanza contains two rhyming couplets, producing a rhyming scheme of aabb. The punchy rhythm of the poem is in trochaic tetrameter similar to other romantic poems of the time including Blake’s ‘Tyger Tyger’.

January 1795 concentrates on everyday life within 1790s London, whilst containing poignant references to Robinson’s personal experiences of the city, for example her association with royalty (line 16), poverty ‘Genius in a garret starving’ (line 4) and struggle to publish her work (lines 35 and 36).  In this context her poem like Wordsworth’s is autobiographical; Robinson’s poem however differs in its subliminal irony.  Although its structure is organised and disciplined, the content relays the chaos and disorder in the city.

The language used in the poem is plain and simple, what Wordsworth himself would refer to as the ‘language of men’ (Romantic Writings, p286). Perhaps more surprisingly, although the poem is written from a female perspective, which is apparent through its continual reference to injustice (fuelled no doubt by Robinson’s own experiences), this poem moves away from the romantic concepts of poetry (mythology, symbolism and nature) and focuses instead on its oral performance. Although poetic techniques including alliteration, repetition and word inversion are present within the poem, by contrast to Wordsworth, these techniques are used as functional methods of driving forward the rhythm and rhyme of the poem.  For example in line 25 the words ‘morning’ and ‘night’ are inverted to maintain the rhyming scheme, in highlighting the moral decline of female behaviour.

Wordsworth and Robinson similarly link historic moments of time and place: the French Revolution and war between England and France.  The poets differ however, in their approach.  Of the two poems, Wordsworth’s appears less representative of the period and references to the French Revolution and class divide are not overt.  His mention of ‘half the City’ (line 646) rising in ‘vengeance’ is by far the most blatant reference to the idea of revolution as well as acknowledgement of the under classes within the city. Robinson subtly introduces the theme of war and revolution through the structure and style of the poem. The rhyming scheme like soldiers is regimented.  The rhythm evokes images of marching troops, whilst perhaps more pertinently depicting the constant struggle and drudgery of life within the city. Further references to war are scattered throughout the poem (although largely in the final two stanzas) and contrast to the unfitting behaviour of those that remain in London:

Hospitals, and groans of anguish’

One of the catalysts for the French Revolution was an attack on people who achieved status by birth rather than by merit.  Robinson appears in her poem to be highlighting this injustice through her juxtaposition of artisans ‘poets, painters and musicians’ (line 33) against bourgeois ‘Lawyers, doctors, politicians’ (line 34).   Wordsworth by contrast having witnessed the revolution in France was more focussed on the social disorder that attacking such injustice could create.  However both poets recognise that a lack of social order exists within the city.  Line 705 of Wordsworth’s poem refers to ‘no law, no meaning, and no end’ whilst Robinson claims that ‘All the laws of truth perverted’ (line 22).  The key difference is whereas Wordsworth concludes that in order to initiate change there must be a period of unrest, Robinson does not offer this same hope.

Robinson like Wordsworth comments on the decline in society but as opposed to the elaborate and chaotic images of Bartholomew’s Fair, she presents a simple and yet rhetorical disparity between London’s rich and poor and the moral and immoral.  From the outset of the poem ‘Pavement slippery, people sneezing, Lords in ermine, beggars freezing;’ (lines 1-2) to the end ‘Honest men who can’t get places, / Knaves who show unblushing faces’ (lines 41-42) Robinson juxtaposes snapshots of city life and its inhabitants, against a backdrop of war and a declining economy ‘Commerce drooping, credit failing’ (line 14).

In conclusion although Wordsworth and Robinson both wrote within the Romantic period, they conform to different views of Romanticism in their style, content and form.  This variance in approach is ultimately affected by their personal experiences of the city.  Although comparatively short, Robinson’s poem portrays a realistic picture of London in this period.  Aside from the war, the Industrial Revolution was gathering momentum, bringing with it population growth, over-crowding in appalling conditions and food shortages.  Those industries and cities largely affected by the growth in new technologies suffered most.  Wordsworth’s depiction of the city appears more detached and he attempts to avoid the realities of life in London.  His fear one could argue, is the loss of order and its impact upon his ability to be creative, as opposed to the social injustices which exist within the city.