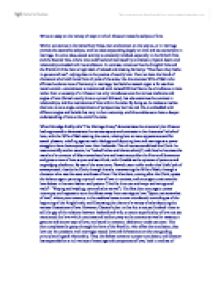 Write an essay on the variety of ways in which Chaucer treats the subject of love.

Write an essay on the variety of ways in which Chaucer treats the subject of love. Within ten stories in the Canterbury Tales, men and women on the way to, or in marriage provide the ostensible subject, with six tales expounding largely on love and its counterpart in marriage. In comic tales, sexual activity is constantly relished, especially in the Miller's Tale and the Reeve's Tale, where love is defined and motivated by animalistic physical desire and relationships clouded with lies and deceit. In contrast, romances like the Knight's Tale and the Franklin's Tale have a high ideal of relaxed and trusting harmony, "Thus been they bothe in quiete and rest", relying also on the poetics of courtly love. Then we have the blend of characters who hold views from all parts of the scale, like the amorous Wife of Bath who affirms the above view of harmony in marriage, but feels her sexual organ is for use than moral control- commitment is intertwined with twisted Biblical fact to be a hindrance in love rather than a necessity of it. Chaucer not only introduces us to the various traditions and angles of love (formal courtly love to cynical fabliaux), but also examines the contrast in relationships, and the motivations of love within the tales. By doing so, he makes us realize that love is not a single compartment of perspectives, but like real life, is embedded with different angles and beliefs that vary in their extremity, and this enables us to have a deeper understanding of love at the end of the tales. What Kittredge fondly calls "The Marriage Group" demonstrates the structural plan Chaucer had engineered to demonstrate the various aspects and contrasts in the characters' beliefs ...read more.

Love for the Wife of Bath is secondary in relationships, and she takes a more practical and pragmatic view of love, demanding support from her husbands, describing her marriages in terms of business contracts, "my dettour and my thral". She demands mastery in love, and even for her fifth husband which she admits she truly loved, he used violence on her, "And with his fist he smoot me on the heed". And yet even as she brags about her shameless manipulation of her husbands and the control women must have over their husbands who will go astray, yet she admits to her romantic nature, and reveals a deep fondness for the one man she could not control. Love in this instance, is presented in a pessimistic light, with no actual compromise or everlasting satisfaction, a power struggle which one must maintain tirelessly to try to gain control over the household. Despite this, the last contradiction reveals a certain softness and belief in actual harmony in love, "I was to hym as kynde/ As any wyf from denmark unto ynde", which hints that the later presentation of love in the Franklin's Tale as mutual harmony is the actual ideal, a balance of both hope and practicality in a relationship which extols commitment and a compromise between husband and wife. It is through the relationships then, through the characters' actions and beliefs, that Chaucer explores the ideas of love. There is 'Patient Griselda' in the Clerk's Tale - 'patient', derived from the Latin verb 'to suffer', which conjures up a picture of an unimaginably long suffering and obedient wife being cruelly tested by a calculating and perversely inventive husband. ...read more.

For the Prioress's Tale, the 'litel clergeon' is so faithful to the virgin that even in his death he is still 'syngynge his song alway', after his brutal murder by the Jews, the story demonstrating a religious love which is perseverant even in death, and even the Man of Law's Tale exemplifies unwavering faith. However, such religious love often hinges on the excess, and even the Prioress's passionate adoration of the Virgin Mary and her violent hatred of the Jews may indicate a crude and undeveloped religious sensibility. Such religious elements inserted into the discussion expand the scope of the discussion of love and extends the meaning and impacts of such a love. In conclusion, Chaucer's treatment of love is both complex and expansive, covering various perspectives and motivations within and out of relationships, and addressing both the political and domestic spheres and the rational differences in their attitudes of love. It is difficult to claim that any one view of love was preferred to the other, especially in a case where we have to look at the underlying context and meaning of each character's voluminous exhortations, and not merely take it as the absolute truth. However one can say that Chaucer did give room to the woman's point of view and stand on love more considerably than poets of his time, and to give such treatment to such a wide diversity of women is quite remarkable. In structuring the main marriage debate to end with the Franklin's Tale, Chaucer assigns the balanced conclusion, of love to be based on mutual harmony, to smoothen out the extremes phrased by the various speakers, and through a variety of literary devices like irony, or usage of Biblical examples, extends the discussion of love and throws forth questions and dilemma which make for an interesting study and analysis. ...read more.