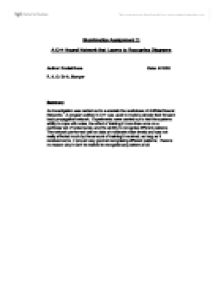 A C++ Neural Network that Learns to Recognise Diagrams

A C++ Neural Network that Learns to Recognise Diagrams

An investigation was carried out to ascertain the usefulness of Artificial Neural Networks.  A program written in C++ was used to model a simple feed forward back propagation network.  Experiments were carried out to test the systems ability to cope with noise, the effect of training it more than once on a particular set of noise levels, and the ability to recognise different patterns.  The network performed well on data at moderate noise levels and was not really affected much by the amount of training it received, as long as it received some. It proved very good at recognising different patterns; there is no reason why it can’t be trained to recognise any pattern at all.

An investigation has been carried out on the usefulness of Neural Networks.  Only one particular network has been studied, which was modelled in the C++ programming language by Daniel Franklin; it is used to recognise diagrams or patterns.  The network is known as a three layer back propagation type; the meaning of this is explained later.  As part of the investigation, the network was trained, using a random noise generating function to vary the pattern slightly each time.

The function success_graph uses the how_successful function to obtain results for a range of noise levels (currently between 0 and 100) which are outputted to a file:

The network was initially trained on perfect data (i.e. with a noise level of zero).  A graph of the results was plotted and analysed, then the network was trained with noise, plotting graphs for each noise level tested.

The number of times the neural network was trained was varied from nothing to nine times.

A section was taken out of loop_train, as the input of data from the user becomes unnecessary.

Artificial Neural Networks are generally very good at recognising patterns.  A network can be trained with a relatively small amount of data to recognise patterns which have quite a large amount of noise.  It starts to get worse at a noise level of 20.  The network can recognise noisy images, even if the training patterns do not include any noise at all, demonstrating the systems inherent robustness.  If the network is trained on slightly noisy data its performance will slightly improve.  If it is trained on very noisy data its performance gets worse because the images no longer represent the original pattern, so the network I trying to recognise something that isn’t there.  The more times you train a network up to a particular noise level, the better it gets.  It is almost pointless in training this network more than twice on a set of noise levels because it hardly gets any better after that.  The network can recognise different patterns, it had no problem recognising the digits 1 and 0, and there is no reason why it couldn’t be trained to recognise any image.