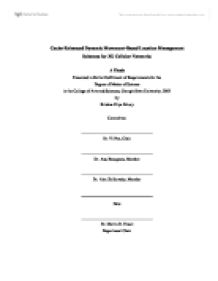 * Call setup delay: This can be improved by maintaining local caches or by using distributed databases. Other factors include the amount of storage and amount of processing requirements. Certain schemes like the prediction-based scheme may not be applicable if the amount of storage and processing power is limited. 3. A Location Management Scheme in 3G and Per-User Caching In this chapter, we first introduce a recently proposed movement-based location scheme for 3G, which has been taken as the reference for the 3G scheme implemented in the thesis. All of the concepts of 3G are dealt with in this scheme. Caching is one very popular technique usually employed to reduce the costs involved in location management. A technique called per-user caching is discussed. 3.1. A Recently Proposed Movement-based Location Management Scheme in 3G The following is the scheme on which the thesis would be based. A number of schemes have been proposed so far for the 2-tier architectures but this scheme deals with 3-tier architecture used in 3G cellular networks. The Figure shows the simplified network architecture for a UMTS system with the GLR deployment at the edge of the visited networks. A GLR contains roamers subscriber's profile and location information. At the first location update procedure under the GLR, the subscriber profile information is downloaded from the HLR to the GLR. The following Figure (Figure.3.1) shows the basic architecture as far as the location management databases are concerned in the thesis. The entire service area would be handled by the HLR with the help of a number of GLR's under which in turn have a number of VLR's under them. Each VLR is under the control of an MSC, which would be covering the area of a number of BS's. Each Base station area is again divided into cells each having a number of MT's. FIGURE 3.1. THE STRUCTURE OF THE 3G NETWORK The GLR handles Update Location messages from the VLR's as if they were the HLR of the subscribers at the subsequent location updates. ...read more.

Experiment three explores the effects of the cache size on the total cost for the improved movement-based scheme. It is found that there is a linear relation between the two. The cost reduces linearly as the cache size increases both for the cache at the GLR and the cache at the VLR. Also it is found that this effect is more at the GLR than that at the VLR and hence would be more beneficial to have a bigger cache at the GLR. It is found however that even for small cache sizes the gain in cost is significant. In summary, the cache-enhanced location management schemes provide better performance than movement-based scheme in terms of location management cost. Of the three cache-enhanced schemes explored, it is found that having a cache both at the GLR and VLR would be most effective no matter how small the cache size is. It is also observed that the cache is even more useful when the CMR gets high. In fact both are directly proportional. The main contribution of this paper is that it presents three improved movement-based location management schemes for the 3G wireless network. The proposed schemes first inherit the advantages of the 3G movement-based scheme: 1) avoid excessive updates from the MT that locates at the boundary of location boundary; 2) easy to implement under current network topology. The proposed schemes also inherit the GLR concept that greatly reduces the sky rising cross-SA update cost caused by increasing number of roaming users that may be a serious problem for future wireless network. Another possible contribution is the simulation model. The design of the model is object-oriented which is easy to modify and extend. In the future study, one might need to study the effect of the proposed scheme on real world applications by developing a more sophisticated simulation model for the wireless networks. Also, an analytical model could be developed for obtaining accurate estimates of the user's LCMR for more accurate caching decisions. The location management issue in emerging 4G networks is another area that can be worked on. ...read more.