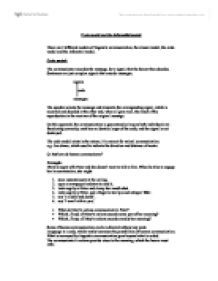 Code model and the inferential model

Code model and the inferential model

There are 2 different models of linguistic communication, the classic model, the code-model and the inferential model.

The communicator encodes the message, by a signal, that the hearer than decodes. Sentences are just complex signals that encode messages.

The speaker selects the message and transmits the corresponding signal, which is received and decoded at the other end, when all goes well, the result of the reproduction in the receiver of the original message.

On this approach, the communication is guaranteed as long as both individuals are functioning correctly, each has an identical copy of the code, and the signal is not destroyed.

The code model exists in the nature, it is correct for animal communication.

e.g.: bee dance, which used to indicate the direction and distance of nectar.

Q: But how do human communicate?

Mary is angry with Peter and she doesn’t want to talk to him. When he tries to engage her in conversation, she might:

Which, if any, of Mary’s actions encode exactly her meaning?

Some of human communication can be achieved without any code.

Language is a code, which vastly increases the possibilities of human communication.

What is conveyed by linguistic communication goes beyond what is coded.

The communicator’s actions provide clues to the meaning, which the hearer must infer.

Communication can be achieved without a code by individuals who can infer each other’s intentions.

The communicator’s behaviour is treated as a piece of evidence about the intentions.

Evidences may be compatible with several different hypotheses and the interpreter’s job to construct the best hypothesis to explain the communicator’s behaviour, the interpretation of non-verbal communication, like the action, involves inference to the best explanation by the intelligent guesswork, rather than decoding of signals by use of code.

An utterance is a piece of evidence of the speaker’s meaning.

Decoding the linguistic sentence meaning is seen as just one part of the process of comprehension.

Is the meaning that Peter and Mary associate with the word “beat” is the same. It may be that, for Peter, “beat” means an extreme fatigue, while for Mary, “beat” is simply a synonym of “tired”. In any event, Peter says, “I’m beat,” not in order to indicate a degree of fatigue that this term might encode, but in order to indicate contextually both his wish to return home and the reason for it, namely his fatigue. The level of fatigue that may justify one’s desire to return home depends on the situation: it is not the same at a party among friends, while taking a stroll, or at work. In Peter’s utterance, then, “beat” indicates the level of fatigue which, in the situation of the utterance, is relevant in that it justifies Peter’s wish. It is not necessary that the codes between interlocutors be identical; nor is it sufficient. Consider the following dialogue: