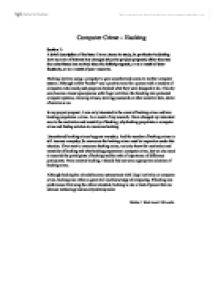 Hacking involves using a computer to gain unauthorized access to another computer system. Although at first "hacker" was a positive term for a person with a mastery of computers who could push programs beyond what they were designed to do, it has by now become almost synonymous with illegal activities like breaking into protected computer systems, releasing viruses, stealing passwords or other sensitive data, denial of service so on.

The motivation of hacking

I read an article about the hackers in a magazine. A pressman asks a hacker:” why do you hack?” The hacker answers:” For money.” Most of hacker hack computer for heist money. They use their greater computing skill and knowledge to gain unauthorized access to another computer system easily. After they break in the system, they can heist money as they wish. There is a case about the economic motive of hacking: In late 1980s, First National Bank of Chicago is the victim of a $70-million computer heist.[www.sptimes.com/Hackers/story_level.html; Article Title: A history of hacking] According the case above, we can see in that event First National Bank lost 70 millions dollars. First National Bank is the direct victim of this event. And the customer is the indirect victim of this event. The hacking has damages the customer’s natural life and human rights. The hacking in this case has perpetrated a crime and not been ethical.

Some companies usually find some hackers to hack companies’ new system. Every company wants to build a security and safe computer system. But there is no one hundred percent security and safe system in the real-world. The company wants to find the bugs, flaws and any other problems with the help of hacking system. So the company finds some hackers using different great computing skill to hack the new system to detect the problems as soon as possible before the system is used. Hacking can advance the development of computing system. In that way, hacking will be professional ethical.

All above show that, if the motivation of hacking is for self economic motive, heist money, retaliation or any other things, it will be seemed not ethical. If the motivation of hacking is for advancing the development of system or software, it will be seemed professional ethical. In another word to say if you hack a computer system with the permission of the host or the owner of the system, your action will be ethical and legal. If not, your action will be not ethical and illegal. And greater the crime you perpetrated, higher the gallows you will be punished.

Hacking is a special skill in using programming language that cannot be learned from the lecture of university. Someone wants to learn the special things of programming or system from that.

Hacking doesn’t only need great skill and knowledge, it also needs interesting. Some hacker doesn’t know what is hacking before becoming a hacker. He will know hacking from appreciating someone else’s hacking. He is interesting in hacking and start to learning harking.

One way is we should increase skill to develop more powerful security software that can raise the alarm as soon as hacking happens. With the help of powerful security software, we can discover the direction and address hacking from. Then we can catch the hacker as soon as possible. Another way is improving the skilful of firewall to overcome hacking. With the skilful firewall, whatever the hackers use, hackers still cannot hack into the system.