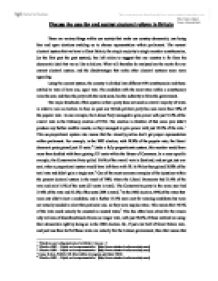 Discuss the case for and against electoral reform in Britain.

Discuss the case for and against electoral reform in Britain

There are various things within our society that make our country democratic, one being free and open elections enabling us to choose representation within parliament. The current electoral system that we have in Great Britain, the simple majority in single member constituencies, (or the first past the post system), has left critics to suggest that our country is far from the democratic ideal that we so like to believe. What will therefore be analysed are the merits for our current electoral system, and the disadvantages that make other electoral systems seem more appealing.

Using the current system, the country is divided into different 659 constituencies and those entitled to vote all have one, equal vote. The candidate with the most votes within a constituency wins the seat, and then the party with the most seats, has the authority to form the government.

The major drawback of this system is that a party does not need an overall majority of votes in order to win an election. In fact, no post-war British political party has won more than 50% of the popular vote. In one example, the Labour Party managed to gain power with just 37.2% of the overall vote in the February election of 1974. The election in October of that same year didn’t produce any further credible results, as they managed to gain power with just 39.2% of the vote.[1] This un-proportional system also means that the minority parties don’t get proper representation within parliament. For example, in the 2002 election, with 18.

The first preference votes are then counted, and those who reach the quota are elected. Then any excess votes are redistributed according to the second preference, so votes aren’t wasted like in the FPTS system. The candidate with the lowest amount of votes is eliminated and then their second preference are counted, so even if your first choice doesn’t gain power, there is the possibility that your second choice will. After this is considered, candidates who’ve reached the quota are elected, continuing until all seats are filled. It’s a complicated system but it ensures that votes aren’t wasted, and there’s the possibility that second choice candidates can still win seats, which might increase the turnout we have in elections.

The ‘alternative vote’ is another type of proportionate system that is used for single member constituencies. This system concentrates on one of the major drawbacks of the FPTP system, where a majority isn’t needed to gain power. To win an election, a party must get at least 51% of the vote, and if after the first count no party has this majority, then the candidate with the least votes is knocked out, and their second preferences are counted. Alternatively, if a majority isn’t held then a second ballot could be held for the strongest candidates in the first round. Yet if voter turnout is low as it is, then it hardly seems people will vote twice, or they may just wait until the second ballot anyway.

Ultimately there are defects within our current electoral system, and some believe that these are outweighed by the benefits that a new system would bring. Whether the Jenkins report is followed, or the Liberal Democrats system, if either, is introduced is yet to be decided. What is apparent though, is with a turnout of a mere 59.4% reform needs to take place, this doesn’t necessary mean changing the system, maybe just modernising it somewhat, in the hope that a democratic nation can be restored.