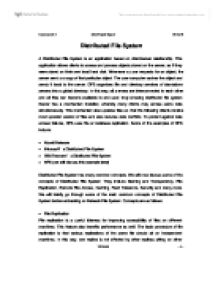 A Distributed File System is an application based on client/server relationship. This application allows clients to access and process objects stored on the server, as if they were stored on their own local hard disk. Whenever a user requests for an object, the server send s a copy of that particular object. The user computer caches the object and sends it back to the server. DFS organizes file and directory services of standalone servers into a global directory. In this way, all servers are interconnected to each other and all files can become available to end-user, truly showing distributed file system. Server has a mechanism installed, whereby many clients may access same data simultaneously. This mechanism also updates files so that the following clients receive most updated version of files and also reduces data conflicts. To protect against data access failures, DFS uses file or database replication. Some of the examples of DFS include:

File replication is a useful idleness for improving accessibility of files on different machines. This feature also benefits performance as well.

NFS depends on two different protocols as a medium for communication between sender and receiver. They are known as RPC and XDR. Below is a description of these two protocols.

NFS uses RPC to communicate between client and server. It is a session layer protocol. It implements a client/server link on the hosts that use it. RPC allows hosts to make calls as if they were local but actually they are on remote hosts.

XDR provides a facility to translate data between diverse computers and operating systems. It is a presentation layer protocol. XDR is used by RPC to host a reliable data exchange between clients and severs.

NFS transparency is achieved through RPC and XDR protocols. As mentioned earlier, these protocols are used by NFS to communicate between clients and servers. Below is a diagram showing the client/server relationship. 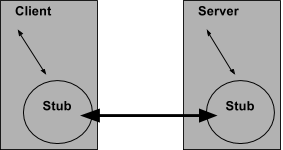 The interaction between the stubs is clearly shown in the above diagram. NFS uses proxy pattern which shows the remote objects as local objects.

The four main services or protocols driving NFS are nfs, mountd, nsm and nlm. All these protocols are explained below in detail.

This protocol resides at the base of NFS and it allows manages files, searching, reading and writing, authentication and file statistics.

This protocol is responsible for mounting exported files systems so that they can be accessed with nfs. Requests such as mount and unmount are received by servers. The server keeps all the information about the exported file systems.

The main job of this protocol is to monitor network status. It monitors nodes to find out the state of a machine. It also informs functions such as reboot and restart.

A COMPARISON OF NFS AND NTFS

NTFS’s scalability is limited as it can support fewer processors as compared to NFS. A file in NTFS is not simple Byte stream as it is in the NFS. In NTFS, a file is a structured object consisting of attributes.

In NTFS every file is stored in an array structure called Master File Table (MFT).

In NTFS, each directory uses B+ tree structure to store an index of the filename.

In my conclusion, I have to say that NFS is very simple to install and implement. It is a highly portable file system although sometimes it is inconsistent. The only drawback of NFS is the fact that it doesn’t scale to large number of clients.