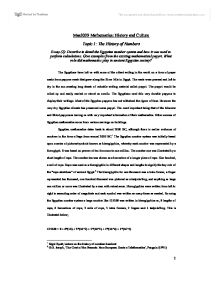 Topic 1: The History of Numbers

Essay (2): Describe in detail the Egyptian number system and how it was used to perform calculations. Give examples from the existing mathematical papyri. What role did mathematics play in ancient Egyptian society?

The Egyptians have left us with some of the oldest writing in the world on a form of paper made from papyrus reeds that grew along the River Nile in Egypt. The reeds were pressed and left to dry in the sun creating long sheets of valuable writing material called papyri. The papyri would be rolled up and easily carried or stored as scrolls. The Egyptians used this very durable papyrus to display their writings. Most of the Egyptian papyrus has not withstood the rigour of time. However the very dry Egyptian climate has preserved some papyri. The most important being that of the Moscow and Rhind papyruses leaving us with very important information of their mathematics. Other sources of Egyptian mathematics come from various carvings on buildings.

Egyptian mathematics dates back to about 2000 BC, although there is earlier evidence of numbers in the form of tags from around 3000 BC.[1] The Egyptian number system was initially based upon a series of pictures/symbols known as hieroglyphics, whereby each number was represented by a hieroglyph.

These methods were devised because basic arithmetic was needed by the Egyptians for every day life. Mathematics was used in measurement, building the pyramids, ritual practices and also to develop a good solar calendar that consisted of 12 months and 5 extra feast days.[4] The government also benefited as basic arithmetic aided them in tax collection. But it was in trade that the idea of fractions was required.

Fractions were used because of the need for calculations in real life situations. Food and land needed to be shared out equally and the ingredients for bread and beer measured out accurately. The Egyptians probably didn’t think of fractions as rational numbers instead relating them to gradients and ratios. They only used unit fractions, meaning fractions with the numerator 1, the only exception being that of 2/3. This was considered as a special fraction and given its own symbol. Unit fractions were written in two ways as pictured below.

[1] Nigel Byott, lecture on the history of numbers handout

[3] I. Grattan-Guinness, 'The Fontana History of the Mathematical Sciences', Fontana (1997)

This student written piece of work is one of many that can be found in our University Degree Mathematics section.