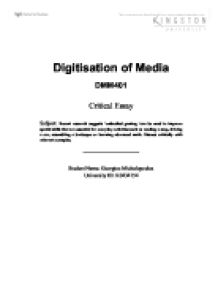 Digitisation of Media DMM401 Critical Essay Subject: Recent research suggests 'embodied gaming 'can be used to improve spatial skills that are essential for everyday activities such as reading a map, driving a car, assembling a barbeque or learning advanced math. Discuss critically with relevant examples. _____________ Student Name: Georgios Michalopoulos University ID: K0434154 Introduction Computer games and game addiction is often the subject of criticism, focusing largely on the influence of objectionable content and prolonged game play on minors. In the 21st century Gaming is a major part of everyday life, contributing to general human evolution. Although they can be useful in many ways, they can also cause serious problems. Computer games have long been a source of controversy, particularly the violence that has become commonly associated with video gaming in general. Video game addiction is another cultural aspect of gaming to draw criticism, as it can have a negative influence on health, on social relations and, in the most extreme cases, has led to death as a result of prolonged gameplay. The problem of addiction and its health risks seems to have grown with the rise of Multiplayer Online Role Playing Games. This essay will focus on the positive aspects of Gaming (which benefits people) and shed some light into the negative side (an intelligent man is able to think for him self and choose the right game selection). Sociability, perception and memory can be improved by playing games and of course many more skills can be acquired. They bring more opportunities to people, and interact with new concepts, images, characters, moralities techniques that they would not have been exposed to before. ...read more.

This program is acting like a game based on 3D graphics so this makes it quite exciting.4 The whole idea is based on motivation because as everyone knows that most people are finding difficulties to understand mathematics and subjects similar to them.5 Students love fun activities because of motivation.6 According to Groccia students for this occasion will be motivated by the use of this software because it is with the form of game and every young person likes plays games. Because every young person wants to explore the unknown and a game is a form that a young person wants to explore by playing it.7 It is made for students because of its iterative design is based on student research.8 Robotic Technology and games The main idea behind creating a robot is to imitate a human. Starting of creating the software of a robot there are 5 main principles as Alexander Stoytchev says.9 Any robot can learn with the way that a young person can learn. One of the five principles is Embodiment, with this way of learning robots can recognise figures easier and quicker. Brown UTRA Program made by iRobot Corporation is the program that made for getting advantage of Embodied robot learning.10 This naturally results in reasoning that if a robot can learn through embodied gaming, a human can also learn in this same way. Nintendo Wii The newest video game console of Nintendo is Wii. It is a next generation console that uses a wireless controller to make people use body movements in order to play the games. ...read more.

Nowadays computers help new challenging drivers to advance their knowledge and skills. Various companies created software for those that are interested to get an additional help there is special software created by various companies for the new potential drivers. This software helps everyone to learn, at least on a theoretical level, about driving a car. This briefly includes information and tests about signs, parking and finally driving. Using this software the user will get confidence and more knowledge about the subject. This will practice the driver giving him tests and this software is an aid to anyone that anyone's instructor will be obvious of this use and will help him to give better and more than the basic advices with the knowledge that will be gained. These skills can be used before, between and even after lessons with the real instructor. The 3D graphics that includes makes it look like a game so the whole involvement is highly enjoyable. During the journey into the driving experience it has step by step guide. All those games can be really useful in our daily life. Maybe not Quake, because its goals are to kill people, but simulation games like Need for Speed will really help someone to understand the basics of driving a car and the concepts around it. It gives you the idea of how to drive, and although it doesn't necessarily mean that you can actually drive, it is sure that you will feel the idea on a big level. Reality does differ from most games intension but, with a logical thinking and proper parental guidance, this game and others similar to that can be really useful. ...read more.