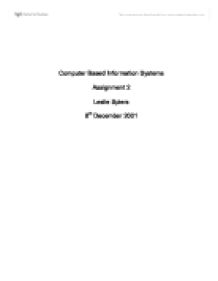 &quot;Explain what is meant by Rapid Applications Development (RAD) and discuss the reasons for the increased use of this method for information systems development in recent years&quot;.

Bocij goes on to clarify his understanding of the term “prototyping” and defines it as “a preliminary version of a part or a framework of all of an information system that can be reviewed by end-users.”[2]  He furthermore states that the process is iterative and that end-user involvement is considerable in proposing modifications prior to the development of further prototypes and in advance of the construction of the final solution.

In a similar way, Turban McLean and Wetherbe refer to the importance of iteration and the development of

RAD packages include a variety of tools, and developers enhance and extend the original version through the iterative process.  RAD projects are suited to a wide range of platforms and in particular client/server ones.. They are most appropriate in situations that deal primarily with data such as sales reporting and decision support.  RAD is not however the best option for applications that require calculations such as engineering or finance.

RAD is not a new approach to systems design and was developed in its original guise by the Du Pont Company where it was known as “rapid iterative production engineering” which in itself was an aspect of Information Engineering.  Du Pont recognised that in the fast moving marketplace in which it competed, it was neither desirable nor commercially sensible to engage in systems development that from the day the system was “live” it was obsolete.  Delays and cost over-runs in system implementation were common – in 1994 31.

This major project was completed in 3 months using a development team of 3 staff and was concluded in November 1996.[10]