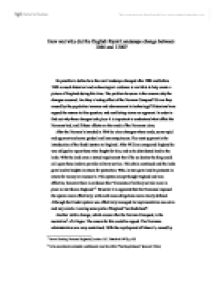 How and why did the English Rural Landscape change between 1086 and 1300?

How and why did the English Rural Landscape change between 1086 and 1300?

Its possible to define how the rural landscape changed after 1086 and before 1300 as much historical and archaeological evidence is available to help create a picture of England during this time. The problem however is the reasons why the changes occurred. Are they a lasting effect of the Norman Conquest? Or are they caused by the population increase and advancement in technology? Historians have argued the answer to this question, and conflicting views are apparent. In order to find out why these changes took place it is important to understand what effect the Normans had, and if these effects are the result of the Normans alone.

After the Norman’s invaded in 1066 its clear changes where made, some rapid and apparent and some gradual and less conspicuous. The most apparent is the introduction of the feudal system to England. After William conquered England he was obliged to repay those who fought for him, and so he distributed land to the lords. With the land came a stated requirement that if he so desires the king could call upon these lords to provide military service.

Due to the extensive building the Normans undertook, with the building of churches, manors, castles and the need for new villages. Large amounts of woodland were cleared to provide fuel and supplies. Also with the population expanding resources were stretched to the limit meaning that more farmable land was needed. Again this resulted in vast amounts of woodland being cleared to provide farmland. As well as land being reclaimed from marshland and even the sea, in Lincolnshire between 1170 and 1240 50sq miles were retrieved from the sea. During the 13th century in Leicestershire 78% of the land was used for arable farming, 12% was used as meadow, 5% as pasture and 5% was woodland. In order to have a successful economy more meadow, pasture and woodland is needed. This removal of woodland was discovered to be dangerous for the economy and so the forest law was past but rarely enforced.  Despite the attempts to create enough food for people many farmers could barely produce enough to feed themselves and by the end of 1300 many people were dieing of starvation.

Rackham O. - The History of The Countryside- 1986- London

[3] Extensive survey of England carried out by William II, completed in 1086

[4] The development of abbeys to which people joined in order to become Monks and Nuns, to take on a life of prayer and service to god.