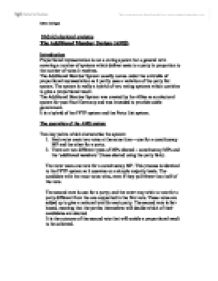 Proportional representation is not a voting system but a general term covering a number of systems which deliver seats to a party in proportion to the number of votes it receives.

The Additional Member System usually comes under the umbrella of proportional representation as it partly uses a variation of the party list system. The system is really a hybrid of two voting systems which combine to give a proportional result.

The Additional Member System was created by the Allies as an electoral system for post-Nazi Germany and was intended to provide stable government.

It is a hybrid of the FPTP system and the Party List system.

The operation of the AMS system

It is the outcome of the second vote that will enable a proportional result to be achieved.

The system may operate with a minimum threshold above which a party must poll in order to gain representation. In Germany the threshold is set quite high at 5% and was originally designed to prevent the emergence of the Nazis and to prevent against extremist parties from wielding disproportionate influence.

Where is the AMS system in use?

The AMS system has been used in elections to the Bundestag, the house of elected representatives in the Federal Republic of Germany, since 1949.

Elections to the Scottish Parliament, Welsh Assembly and the Greater

London Authority are taken under an AMS system.

Strengths and weaknesses of the system

total vote, and voters having no say over which name appears in which

The Jenkins Commission for electoral reform rejected the AMS system along with the many others including the Alternative Vote (AV). However, Lord Jenkins suggested that another hybrid system, AV+, might be considered as a possible reform of the current British system of FPTP.

AV+ can either be a variation on the Alternative Vote or an adaptation of the AMS system.

The purpose of AV+ is to ensure both a proportional result and that every MP is returned with a majority of their electorate.

The system is the same as the AMS system except that instead of the constituency vote being based on FPTP it is based on the Alternative Vote.