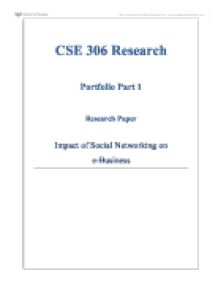 Impact of Social Networking on e-business

Impact of Social Networking on

The advent of the web2.0 has resulted in the upsurge of users onto the internet through their daily activities on social networking sites. Business firms in search of suitable means to strengthen the relationship between their customers and suppliers have sought to achieve this through such social networks. This paper examines the impact of social networks on e-business within firms, discussing some opportunities and possible risks firms could be exposed to.

ince the advent of web2.0, the internet has evolved from static screenfulls to real time interactions between users, resulting in a new internet ecosystem characterized by social collaborative technologies. The advancement of such technologies has led to the emergence of new subsidiaries of network sociology based on traditional and modern complex networks such as social network sites (SNSs), blogs, wikis, folksonomy etc. the fast pace at which these SNSs are growing in recent years has resulted in several Online Social Networks (OSN) such as Facebook, Friendster, Hi5, MySpace, to mention but a few.

Social networking (SN) may be defined as an internet based collection of individuals, organizations or other social entities that are interconnected through meaningful relationships that allow them to share profile information, resources and expertise amongst their circle of connections as well as view and traverse their list of connections and those made by others within the system. (Lea et al., 2006; Boyd & Ellison, 2007)

The emergence of OSNs has and continues to attract a large number of the general public onto the internet. Millions of users, having joined SNSs such as Facebook, MySpace, Friendster and the likes, have integrated the usage of these sites into their day to day activities.

The increasing popularity of SNSs amongst businesses and casual users alike is a standing proof that the social collaborative tool based on the ground breaking web2.0 technology has come to stay for good. However, businesses need to take caution about the way they utilize this media alongside their ecommerce operations due to the effects involved.

The increasing population of users on social networking sites presents an outstanding opportunity for businesses to broaden their domain of contacts. Having an organization create an online profile on a social network such as Facebook could help converge their intended market as well as capture other customers beyond physical reach. Haris, et al., (2009), identified some businesses that promoted their growth through collaboration and dedication to social networking. An example of such businesses is “Wiggly Wigglers” which managed to build up a global audience of 10,000 Facebook users. A presentation transcript by Frost & Sullivan (2010) revealed that, about 54% of organizations have gained additional customers from social networking sites.

Businesses have become more focused on customer relationship management thereby losing sight of opportunities offered by SNs that allow the creation of actual personal relationships with their respective customers. With the use of OSNs, organizations can facilitate a level of communication that feels real with their prospective customers thereby improving customer satisfaction and strengthening loyalty. A study by Coleman Parks Research (2010) disclosed that, two thirds of companies see improved customer satisfaction from the adoption of social media. Whereas that of Frost & Sullivan (2010)