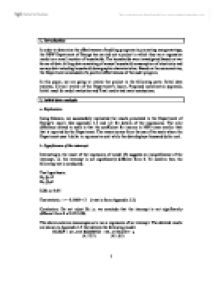 In order to determine the effectiveness of auditing programs in promoting energy savings, the NSW Department of Energy has carried out a project in which they ran a regression model on a small number of households.

In order to determine the effectiveness of auditing programs in promoting energy savings, the NSW Department of Energy has carried out a project in which they ran a regression model on a small number of households. The households were investigated based on two forms of data: billing data consisting of annual household consumption of electricity and survey data including household demographic characteristics. Based on the econometrics, the Department concluded of a positive effectiveness of the audit program.

In this paper, we are going to review the project in the following parts: Initial data analysis, Critical review of the Department’s report, Proposed econometric approach, Initial result & model evaluation and Final results and main conclusions.

Using Shazam, we successfully replicated the results presented in the Department of Energy’s report. See appendix 1.1 and 1.2 for details of the regressions. The only difference related to scale is that the coefficient for income is 1000 times smaller than that is reported by the Department. The reason comes from the use of the scale where the Department uses 1 dollar to represent as unit while the data displays thousand dollar unit.

b. Significance of the intercept

Interestingly, the result of the regression of model (3) suggests an insignificance of the intercept, i.e. the intercept is not significantly different from 0. To confirm that, the following test is conducted.

Conclusion: Do not reject H0 i.e. we conclude that the intercept is not significantly different from 0 at 0.05 LOS.

The above outcome encourages us to run a regression of no intercept. The detailed results are shown in Appendix 1.3 that derives the following model:

This model seems to produce better results than the previous one (3).

Data and their features should be presented in an appendix.

The advantage of conciseness actually has a counter effect on this part. It is too much concise and in severe lack of technical language and details. The report says very little about building the model and underlying assumptions. In this very important part of the project where is a fundament for every later conclusion, any related reason should be fully presented and any necessary technique should be applied. Particularly, when econometrics has been chosen to be the media of analyzing the data, the work must have been done in logic order under requirements of a model regression building in econometrics.

The paper does not give any reason for choosing the model or omitting variables. No explanation and no evidence are stated to prove that the model is not misspecified. Depending on data and purpose of report, etc, a model can be linear, quadratic or log forms. There should be a discussion about this or at least a review of the similar paper to know what variables should be included in the model.  Indeed, there are a variety of methods to improve the model, e.g. variables can be transformed to log, interaction variables can be added, etc. However, none of them is presented including some basic diagnostic tests such as tests of heteroscedasticity, autocorrelation, etc to give the model statistical credibility.

Interpretation is inadequate and not justified formally by appropriate statistic tests or economic theories. E.g. in the interpretation of “significance” of the model (3), coefficients of ROOMNO (5.4) and DAUD (-2.2) without any explanation that can mathematically results to the conclusion of a better model. In addition, the conclusions of R2 and ROOMNO are not supported by any statistics.

There are no improvements in heteroscedastic problems. P-B-G’s p-values of both transformed model 1 and 2 are still 0.00. This shows that the action of dividing both sides of  the models by square root of income does not help to improve the heteroscedastic problems. This suggests the heteroscesdasticity may be resulted from some factor other than incomes. Several further tests and attempts need to be done to solve the problems.

c. Conclusion about impacts of the audit programs:

•The Department of Energy, through their small-scaled research, has considered audit programs as one of the possible demand-side management scheme that can improve energy savings.

•A full-scaled project has been conducted to measure the effectiveness of such scheme. Data used are expanded to all 296 households whose electricity consumption is monitored.

•The purposes of this paper are (1) examine the previous report and (2) analyse the full data in order to conclude about effectiveness of audit programs in promoting energy savings.

•Econometric evidence shows that (1) although the previous report is concise and accurate, it is still incomplete and in lack of in dept analysis, (2) a few econometric problems may result in changes in measure of effects of audit programs and (3) the results suggest that the audit programs have strong positive effects on energy savings.

•This report, therefore, recommends the audit programs should be implemented; however, some further researches may be required to clearly conclude about the effects of such schemes.

[2]All the tests are fully showed in the Appendix 3.a-d