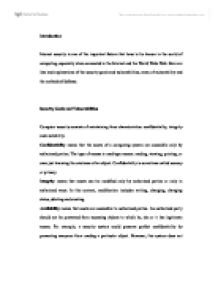 Internet security is one of the important factors that have to be known in the world of computing, especially when connected to the Internet and the World Wide Web.

Internet security is one of the important factors that have to be known in the world of computing, especially when connected to the Internet and the World Wide Web. Here are lists and explanations of the security goals and vulnerabilities, areas of vulnerability and the methods of defense.

Confidentiality means that the assets of a computing system are accessible only by authorized parties. The type of access is read-type access: reading, viewing, printing, or even just knowing the existence of an object. Confidentiality is sometimes called secrecy or privacy.

Integrity means that assets can be modified only by authorized parties or only in authorized ways. In this context, modification includes writing, changing, changing status, deleting and creating.

Availability means that assets are accessible to authorized parties. An authorized party should not be prevented from accessing objects to which he, she or it has legitimate access. For example, a security system could preserve perfect confidentiality by preventing everyone from reading a particular object. However, this system does not meet the requirement of availability for proper access. Availability is sometimes known by its opposite, denial of service.

Software. It is an integral part of the computing system.

People. They can cause a great deal of damage to any computer. For different reasons, people attack computers or, more often, the information they contain.

Intruders. Disgruntled employees can seek revenge against an organization by planting a logic bomb or any other destructive program. Many times such intruders are easy to identify; managers should keep an eye on unhappy employees or employees with personal problems, such as illness in the family or drug abuse. These people are prime candidates for computer crimes because of their need for fast cash.

Hackers. They are a different kind of computer intruder. Hackers can do a great deal of harm, but they generally are not malicious – their goal is to challenge the system and discover its vulnerabilities. Instead of prosecuting hackers, some companies hire them to penetrate the system in a controlled environment and to identify weaknesses in the system.

Development controls – quality standards under which a program is designed, coded, tested and maintained.

Policies. Some controls on computing systems are achieved through added hardware or software features. Other controls are matters of policy. In fact, some of the simplest controls, such as frequent changes of passwords, can be achieved at essentially no cost but with tremendous effect. Training and administration follow immediately after establishment of policies. Legal and ethical controls are an important part of security. The law is slow to evolve, and the technology involving computers has emerged suddenly. Although legal protection is necessary and desirable, it is not as dependable in this area as it would be in more well-understood and long-standing crimes.

The area of computer ethics is likewise unclear. It is not that computer people are unethical, but rather that society in general and the computing community in particular have not adopted formal standards of ethical behavior. Some organizations are attempting to devise codes of ethics for computer professionals. Although these are important, before codes of ethics become widely accepted and therefore effective, the computing community and the general public need to understand what kinds of behavior are inappropriate and why.