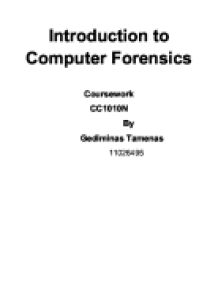 Essay will address how, electronic evidence and technique in computer forensics work. Also it will be discussing how does computer forensics works and what steps does it requires to keep all the data secure, what tools its requires to recover lost data. This will allow the reader to get clear idea what “Computer Forensics” job is about and what they do. The main purpose of forensics is to search and analyze computer system to find and evidence for suspects that can be use in court. Computer Forensics also involves preservation, identification, extraction and most important documentation of what evidence they have collected in form of magnetically, optically or electronically stored, collected data. (Robin Bryant, 2008) Most of the techniques that investigators use in crime scene has digital counterparts, but also there is some unique aspects to computer investigation. Some say that using computer evidence in court against the criminal is not really good idea, because it’s easy to change computer data, and to check how the data been used in a crime scene. (John Sammons, 2012)

Forensic technologies are designed to prepare and extract evidence from a seized computer system.

(Marie-Helen Maras, 2012) Investigator can collect bunch of evidence, that can be useful, but if investigator doesn’t submit proper evidence that is required, evidence may be not admissible.  All these steps are very important, but if investigator does not compete first step “Making sure that computer is Secure” investigator will not be allowed to start the investigation or the evidence they found might not be admissible.(Harlan Carvey, 2012) Some criminals also found a different way to hide files from computer forensics team and make more difficult to found evidence, some criminals use computer program called “Anti-Forensics” so detectives have to be aware of that program and carefully found the way how to disable the application before doing any investigation, so will allow accessing all data. (Robert C. Newman, 2007)