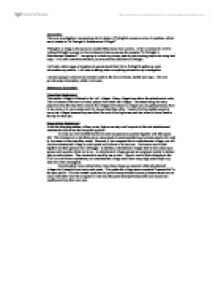 Introduction This is an investigation I am carrying out of a study of Pirbright to answer a series of questions, which are all related to "Is Pirbright A Suburbanised Village?" Pirbright is a village in Surrey and is located 40km away from London. In this coursework I will be visiting Pirbright in person to find evidence to help me answer the question "Is Pirbright A Suburbanised Question?" I am going to collect my primary data by interviewing people and using land maps. I will also look at the structure, environment and facilities of Pirbright. I will ask a whole range of questions to people about their life in Pirbright to gather as much information as possible. I will also be taking notes on anything relevant to my investigation. I am also going to collect some secondary data in the form of books, leaflets and maps. This will provide extra information, which I will need. Background Information Theoretical Background The modern village is different to the 'old' villages. Many villages have taken the suburbanised route. This is because of the move of many people from cities into villages. The reason being for many people to leave the city life to come to the villages are because in villages you can get big houses, there is less crime, it is more quieter and it is less polluted than cities. Usually it is the wealthy people to move into villages because they can afford the cost of the big houses and also afford to travel back to the city for their job. ...read more.

Though they said that the quality of healthcare is much better and more efficient in the village than it is in the city. This evidence proves that Pirbright is a suburbanised village because people use their cars to travel to work and buy their food outside the village, showing that they are fairly wealthy, however they still use things, which are in a normal village such as the local newsagents etc. Analysing The Secondary Data Map Of Pirbright Village These three maps are useful because they contain secondary information, which will help us answer the question "Is Pirbright A Suburbanised Village?" The data was collected by the ordinance survey, a government organisation that means we can rely on it for being accurate. We would expect Pirbright as shown on the map (big farm land with few houses and few facilities). If Pirbright became a suburbanised village we would expect the recent map to show more houses, which would be for the new people moving into the village. The 1871 map shows us that there were fewer houses, a pub, a church and a school for boys and girls. Back then there were lots more open spaces. The more recent map shows us that there are now a lot more facilities and houses. When we look at the map we can see that there was an increase in schools, nurseries, telephone booths. We can see that the similarities are the school, the pub, the church and the pond. ...read more.

I have concluded that the answer to this question is yes because in my opinion Pirbright is more developed than normal villages. So it has become a suburbanised village and a suburb. Evaluation The reason why I travelled to Pirbright was because I wanted to investigate the different types of housing and facilities in Pirbright to obtain evidence to help me support my answer to the question, is Pirbright a suburbanised village? I collected my primary data in the forms of a land use map, questionnaires and sketches. I collected my secondary data in the forms of the three maps. I tried to collect as much data as possible in the time spent there, however I did not have time to go around the village looking at houses one by one for filling out my land use map. The reason I did not have enough time was because of the poor weather that caused us to leave early. If I had another chance to visit Pirbright again I would make sure that I made enough time for myself to go around the whole village looking at everything in as much detail as possible. I also wanted to get some more detail about the village in the form of secondary data because I know that the secondary data would be more accurate than my primary data. I wanted know about the prices of houses and the quality of food in the village. If I went again I would make enough time to collect more information to help me prove whether Pirbright is a suburbanised village or not. ...read more.