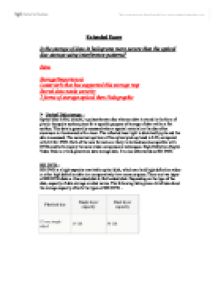 Is the storage of data in holograms more secure than the optical disc storage using interference patterns?

Is the storage of data in holograms more secure than the optical disc storage using interference patterns?

Latest tech that has supported this storage reqt

2 forms of storage-optical then Holographic

Optical disc is flat, circular, a polycarbonate disc whereon data is stored in the form of pits (or bumps) a sunken place for a apecific purpose of storage of data within a flat surface. This data is generally accessed when a special material on the disc often aluminum is illuminated with a laser. The reflected laser light is distorted by pits and the data is accessed. The numerical aperture of the optical pick-up head is 0.65, compared with 0.6 for DVD. Both of the new formats are likely to be backward compatible with DVDs and both employ the same video compression techniques. High Definition Digital Video Disk is a third generation data storage disk. It is also abbrevated as HD DVD.

HD DVD is a high-capacity rewritable optical disk, which can hold high definition video or other high definition data in a comparatively low memory space. There are two types of HD DVD disks a. One-sided disk b. Both-sided disk. Depending on the type of the disk, capacity of data storage on disk varies.

Holographic memory is a technique that can store information at high density inside crystals or photopolymers known as holograms.Holography (from the Greek, Όλος-holos whole + γραφή-graphe writing) is the science of producing holograms, an advanced form of photography that allows an image to be recorded in three dimensions. The technique of holography can also be used to optically store and retrieve information. 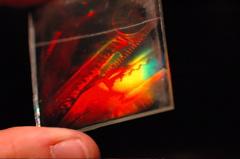 Holographic data storage is a technique that can store information at high density inside crystals (à la HAL 9000) or photopolymers. As current storage techniques such as DVD reach the upper limit of possible data density (due to the diffraction limited size of the writing beams), holographic storage has the potential to become the next generation of storage media. The advantage of this type of data storage is that the volume of the recording media is used instead of just the surface.

Using currently available SLM's can produce about 1000 different images a second at 1024 × 1024 bit resolution. With the right type of media (probably polymers rather than something like LiNbO3), this would result in about 1 gigabit per second writing speed.

For data retrieval, the laser (reference beam) is focused on the appropriate page according to the address generated. A photo detector array on the other side of the hologram records the image of that sub-hologram.

Problems with the Holographic storage system

A difficulty with the holostore technology had been the destructive readout. The re-illuminated reference beam (i.e. the read beam, see How holographic storage system works), used to retrieve the recorded information, also excites the donor electrons and disturbs the equilibrium of the space charge field in a manner that produces a gradual erasure of the recording. In the past, this has limited the number of reads that can be made before the signal-to -noise ratio becomes too low. Moreover, writes in the same fashion can degrade previous writes in the same region of the medium. This restricts the ability to use the three-dimensional capacity of a photo refractive for recording angle-multiplexed holograms.

The other challenge has been the geometry of the crystal medium. It is difficult to grow large crystals of good optical quality and of limited size. As a consequence of this problem, widespread application of the bulk photo refractive technology has not been occurred, despite an initial surge of development in the decade of the 1970s.