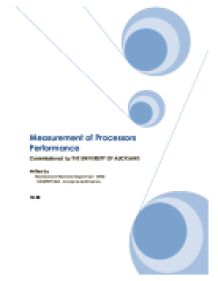 Measurement of Processors Performance report. In the experiment, a testing code was developed in C Programming Language. The design involved filling up each memory hierarchy level with data, then by noting down the time taken to access each level, the ban

In modern computers, the memory is always divided into multiple levels, which are structured into a memory hierarchy (Figure 1). In the memory hierarchy, each level is distinguished by the response time with the top-most level being the fastest. In most computers, this level is the processor registers which are often accessed in one CPU clock cycle. The next level is the Level 1 (L1) Cache, which is temporally and physically closest to the main processor. The third level is usually the Level 2 (L2) Cache and the forth level is the main memory [1].

* Values are estimated based on research, no official documentation

For the sequential access to the memory, we expect to observe four distinct levels on the graph, corresponding to accessing the L1 cache, the L2 cache, the L3 cache and the main memory. The reason for this expectation is that the accessing time will increase significantly when there is a transition between different memory hierarchies. [6] For the random access to the memory, a graph of an exponentially decrease in the data transfer rate should be seen, as the current level of memory hierarchy is saturating. Then it should level off at a particular value since the memory size of the current level is exceeded.

Alternatively this could have been done on Linux using gcc O4 which would run with the maximum optimization [9].Latency of the processor should be found by using 3rd party software and should be considered for the testing stage [10].Enough repetitions of the memory access should be performed to obtain more reliable results.