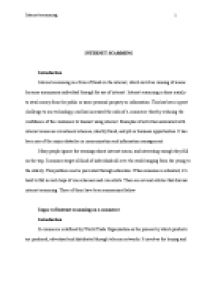 Internet scamming is a form of fraud on the internet, which involves running of scams by some anonymous individual through the use of internet. Internet scamming is done mainly to steal money from the public or some personal property or information. This has been a great challenge to our technology, and has increased the risks of e-commerce thereby reducing the confidence of the consumers to transact using internet. Examples of activities associated with internet scams are investment schemes, identity fraud, and job or business opportunities. It has been one of the major obstacles in communication and information management.

Many people ignore the warnings about internet scams, and interesting enough they fall on the trap. Scammers target all kind of individuals all over the world ranging from the young to the elderly. This problem can be prevented through education. When someone is educated, it’s hard to fall in such traps of con schemers and con artists. There are several articles that discuss internet scamming. Three of them have been summarized below.

Impact of internet scamming on e-commerce

E-commerce is defined by World Trade Organization as the process by which products are produced, advertised and distributed through telecom networks. It involves the buying and selling of goods or services over the internet (Laudon & Traver, 2009). Instruments or channels used to do e-commerce include internet, phone, fax among others.

Effects of this  to e-commerce can be immense. Smith points out that Scammers may end up using other people identity to carry out online transactions. It would be hard to know whether you are dealing with the right person or whether it’s a fraudulent individual (2011). This is one of the major chalenge affecting e-commerce.

This form of scam promise the victims great opportunities of making a lot of money without straining. The victims are usually enticede by the scammers using such statements as ‘be your own boss’.This involve adverising business opportunities for  a given amount of money through email. The victim who fall into the trap of paying for the venture, end up losing the money by either not receiving the information concerning the venture, or the person end up getting works such as data entry and other works which can be done through the computer.customer ends up spending a lot of money through this form of scam. According to National Fraud Information center, many victim of this trap are people under the age of 30. This also poses threat to e-commerce, and may discourage people from doing online businesses.

This requires a person to give an advance payment in order to be given something of greater value such as loan, credit card or job. After the money has been given it losts and the contact breaks.

Chang, J. (2008). An analysis of advance fee fraud on the internet: protect yourself. Journal of

Shadel, D. (2012). Outsmarting the Scam Artists: How to Protect Yourself From the Most Clever Cons. Washington DC: John Wiley & Sons.