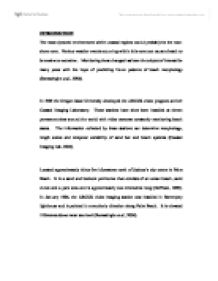 The most dynamic environment within coastal regions would probably be the near-shore zone.  Various weather events occurring within this zone can cause a beach to be erosive or accretive.   Monitoring these changes has been the subject of interest for many years with the hope of predicting future patterns of beach morphology (Ramasinghe et al., 2004).

In 1992 the Oregon State University developed the ARGUS video program at their Coastal Imaging Laboratory.  These stations have since been installed at eleven permanent sites around the world with video cameras constantly monitoring beach states.   The information collected by these stations can determine morphology, length scales and temporal variability of sand bar and beach systems (Coastal Imaging Lab, 2005).

Located approximately thirty-five kilometres north of Sydney’s city centre is Palm Beach.  It is a sand and bedrock peninsular that consists of an ocean beach, sand dunes and a park area and is approximately two kilometres long (Hoffman, 1982).  In January 1996, the ARGUS video imaging station was installed in Barrenjoey lighthouse and is pointed in a southerly direction along Palm Beach.  It is elevated 110metres above mean sea level (Ramasinghe et al., 2004).

This study involves the use of the Internet to assess changes in the morphology and wave conditions at Palm Beach, Sydney, NSW.  The specific aims are to:

On 28/03/01 there was an increase in both wave heights and period suggesting that the morphological structure of the beach may progress into a rhythmic bar and beach, however further studies of the beach would need to be done to confirm this.

The morphological changes of beaches are directly influenced by wave height, direction and period, which are the dominant forces of sediment movement within the nearshore zone. The various stages of the Wright and Short (1984) model can be identified at Palm Beach however the notable differences between the progression of the stages suggest it is an unusual beach system.  This was also recorded by Hoffman (1982) who observed that this beach system was exposed to a high energy, deep-water wave climate, with minimal inshore wave height reduction by bottom friction due to the narrow continental shelf and steep nearshore zone.

Brander, R.W., 1999. Field observations on the morphodynamic evolution of a low-