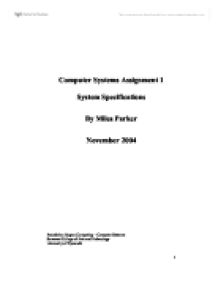 Somerset College of Arts and Technology

IT Infrastructure Investment plan for November 2004

Conclusions for Upgrade to USB2.0

IT Infrastructure Investment plan for November 2004

The purpose of this document is to submit to the company a number of different computer systems that has been investigated, based on the directive from head office, to source a computer system capable of handling our new High-Resolution graphics software.

We shall begin by submitting the standard specifications of the models selected and we have included the information relevant i.e. the architecture, speeds and costs of the systems. After comparisons and advantages and disadvantages have been put forward we shall complete this submission with our recommendations for the system that we believe has the best suitability for the purpose for which it is intended.

With the advent of new technologies for assisting in the rendering of the high-resolution graphics that the company requires, we have no option but to invest in high-end development systems in order to sustain our credibility within the Graphics Market.

serially (all in a single row. See Fig 5.) through a serial port. The standard parallel port is capable of sending 50 to 100 kilobytes of data per second

In 1994 the IEEE1284 standard was issued to define the 5 modes of operation of the Parallel interface, they were;

The benefits of Parallel data transference over serial is that it flows along 8 wires as opposed to four, which increases the speed of data, however it still doesn’t compare to the speed of USB, which is one of the main reasons why I believe that all printers and scanners should be upgraded to use the USB interface, as it will increase our productivity by de-limiting bottlenecks in the system.

See Appendix (D) for a diagram of electrical and mechanical information of the Centronics interface.

The term serial comes from the fact that a serial port "serializes" data. That is, it takes a byte of data and transmits the 8 bits in the byte one at a time. The advantage is that a serial port needs only one wire to transmit the 8 bits (while a parallel port needs 8). The disadvantage is that it takes 8 times longer to transmit the data than it would if there were 8 wires. Serial ports lower cable costs and make cables smaller.

Serial ports rely on a special controller chip, the Universal Asynchronous Receiver/Transmitter (UART), to function properly. The UART chip takes the parallel output of the computer's system bus and transforms it into serial form for transmission through the serial port. In order to function faster, most UART chips have a built-in buffer of anywhere from 16 to 64 kilobytes. This buffer allows the chip to cache data coming in from the system bus while it is processing data going out to the serial port. While most standard serial ports have a maximum transfer rate of 115 Kbps (kilobits per second), high speed serial ports, such as Enhanced Serial Port (ESP) and Super Enhanced Serial Port (Super ESP), can reach data transfer rates of 460 Kbps.

An important aspect of serial communications is the concept of flow control. This is the ability of one device to tell another device to stop sending data for a while. The commands Request to Send (RTS), Clear To Send (CTS), Data Terminal Ready (DTR) and Data Set Ready (DSR) are used to enable flow control.

For example if you have a modem that communicates at 56 Kbps. The serial connection between your computer and your modem transmits at 115 Kbps, which is over twice as fast. This means that the modem is getting more data coming from the computer than it can transmit over the phone line. Even if the modem has a 128K buffer to store data in, it will still quickly run out of buffer space and be unable to function properly with all that data streaming in.

Again although serial is used by such devices as modems, mice, PDA’s and Data capture devices, it is still slower than USB and is also prone to bottlenecks, as data is transferred. For this reason we again recommend that all of these serial devices be upgraded to USB.

Nearly every computer that is bough today has a USB (Universal Serial Bus) interface on it. Sometimes there is a few at the back, but more increasingly they are being added to the front of the system unit to allow for easy plugging and playing of peripheral such as digital cameras, printers, hard drives, PDA’s, Modems, Scanners and flash keys.

The idea behind USB was to relieve some of the headaches associated with installing multiple high-speed devices. In the past, it was only possible to associate a couple of devices with a parallel or serial port, for example a system may have had a printer and a scanner attached to the same parallel port, this caused the flow of data from the scanner to the system unit to become slow, but with USB there can be as many as 127 devices attached at any one time, with no loss in speed of data transfer. Connecting a USB device to a computer is simple -- you find the USB connector on the back of your machine and plug the USB connector into it.

The Universal Serial Bus has the following features:

Conclusions for Upgrade to USB2.0

After weighing up the advantages and disadvantages of the other interfaces we feel that the company must move with the times and upgrade all our serial and parallel peripherals to USB 2.0 as it is quite clear from the differences in Data transfer speeds that we would increase our productivity and reduce bottlenecks both on the individuals system and across the network.

In Appendix (D) we have displayed our findings into 2 other interfaces which we feel will compliment the existing IT strategy for the future, as we have recommended upgrading our external peripherals, it would seem pertinent to investigate how we can improve the data transfer speed of our storage media. Both Firewire and SCSI could give greater improvements to our current IDE Hard-Drives.

The following diagram shows the architecture behind the PA-8700 series processor. 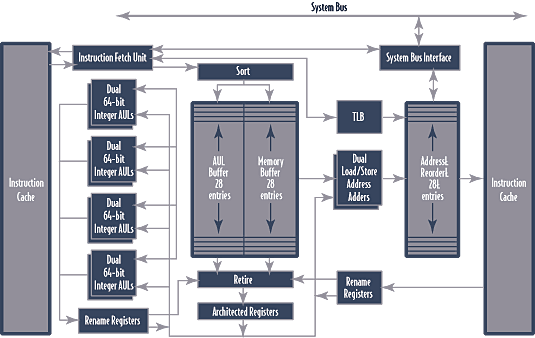 The Instruction words of the PA-8700 have a constant width of 32bits, which simplifies the instruction decoding logic. Instructions are issued directly in silicon, therefore microcode is not required. There are limited addressing modes so the most frequent of operations can be performed at a faster rate. 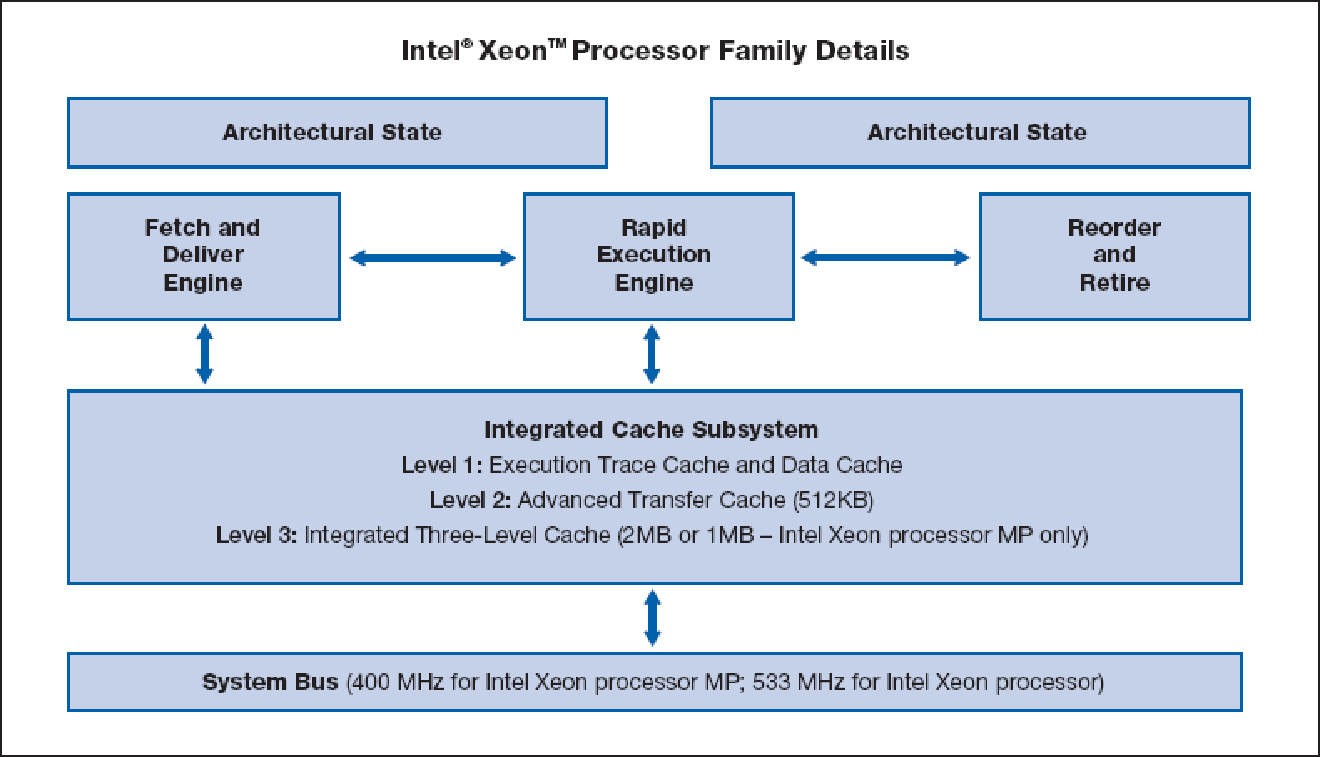 The Reorder and Retire block takes the instructions, that were operating out of order and puts them back into program order. The system bus provides up to 4.27GB/sec bandwidth, running at 533MHz.

FireWire was originally created by Apple and later standardized as IEEE-1394, actually preceded USB and had similar goals. Firewire is a serial connection that operates at very high data transfer speeds. The average speed of data transference is between 100 and 800Mbits per second, although it has been promoted that it will transfer data up to 3200Mbits per second. Firewire was originally intended for devices working with lots more data -- things like camcorders, DVD players and digital audio equipment. Firewire and USB share a number of characteristics and differ in some important ways. Here's a summary:

SCSI – pronounced “Scuzzy” is primarily a storage device interface, (although it can also be used for other peripherals such as scanners) for high-end business machines, although some home users like to use it, to increase their data access speeds.

With a SCSI adapter you can connect up to 16 devices to one adapter, but the last device in the line has to be “terminated”; this means that at each end of the SCSI bus is closed, using a resistor circuit. If the bus were left open, electrical signals sent down the bus could reflect back and interfere with communication between SCSI devices and the SCSI controller. Only two terminators are used, one for each end of the SCSI bus

A parallel Interface found on most microcomputers

A processor where each instruction can perform several low-level operations such as memory access, arithmetic operations or address calculations

Dual Inline Memory module. Small circuit boards carrying memory integrated circuits, with signal and power pins on both sides of the board

Enhanced Capabilities Port is defined in standard IEEE 1284. It is bi-directional and faster than earlier parallel ports.

A parallel port that confirms to the IEEE's EPP standard

Millions of bits per second.

Millions of cycles per second. The unit of frequency used to measure the clock rate

A standard for connecting peripherals to a personal computer

A processor whose design is based on the rapid execution of a sequence of simple instructions.

The most common form of serial interface on most microcomputers

Popular processor-independent standard. Via a parallel bus, for system-level interfacing between a computer and intelligent devices including hard disks, floppy disks, CD-ROM, printers, scanners, and many more.