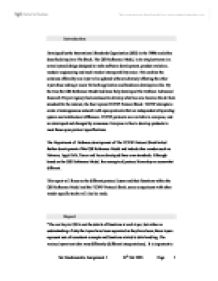 Developed by the International Standards Organisation (ISO) in the 1980s and often described simply as The Stack, The OSI Reference Model, in its simplest terms is a seven layered design designed to make software development, product evolution, modular engineering and multi vendor interoperability easier. This enables the solutions offered by one layer to be updated without adversely affecting the other layers thus making it easier for both application and hardware developers alike. By the time the OSI Reference Model had been fully developed The Defence Advanced Research Project Agency had continued to develop what has now become the de facto standard for the internet, the four layered TCP/IP Protocol Stack. TCP/IP attempts to create a heterogeneous network with open protocols that are independent of operating system and architectural difference. TCP/IP protocols are available to everyone, and are developed and changed by consensus. Everyone is free to develop products to meet these open protocol specifications.

This report will focus on the different protocol layers and their functions within the OSI Reference Model and the TCP/IP Protocol Stack, some comparisons with other vendor specific stacks will also be made.

), are usually delivered to other systems and often involving complex programmes that in turn act as a front end to a variety of services.

Sometimes referred to as "connection-oriented" this layer is the first one that offers connector functions to both a layer above and a layer below. This layer takes information provided by the application layer making sure that it is in a format that other architectures (i.e. Apple Mac) can read. This layer is also responsible for encoding, encrypting and compression. Layer 6 has to make some assumptions in order to perform its task. The first is that a route exists to the other machine. The second is that all underlying functions needed to establish that connection are available in the lower layers. If they are not, Layer 6 does not attempt to fix things by itself; it simply fails.

Maintains end to end communication sessions of the logical link between users. Such function involves a session, which may in turn support one or more presentation spaces above it and one or more applications above that. The session layer is also responsible for reporting upper layer errors.

The workhorse of the stack, and the part that most people think of first when they consider networking operations. Maintains the flow of data from source to destination. Provides error checking and recovery of data between the devices,  The transport layer can also sequence and acknowledge data requests.

The OSI model plays an important role in standardizing communications between disparate systems. Were it not for the standards and specifications originally outlined within in the OSI model, linking Apple, Novell and other systems would certainly prove much more challenging.