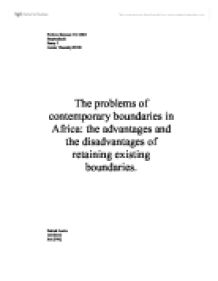 The problems of contemporary boundaries in Africa: the advantages and the disadvantages of retaining existing boundaries.

The problems of contemporary boundaries in Africa: the advantages and the disadvantages of retaining existing boundaries.

“Collapsed states (e.g. Liberia, Somalia), rampant genocide and some 100 coups since 1950 point to a weak system of boundary monitoring and management. No continent on earth has suffered more bloodshed arising from territorial disputes than Africa.” (R. Griggs: 1997) From above it is clear that Africa’s boundary situation is it’s “Achilles’ heel” in trying to achieve a renaissance. In analyzing the boundaries’ repercussions I will look at the cultural, political and economic spheres. Armed with knowledge about African boundaries I aim to weigh up the advantages and disadvantages of retaining the existing boundaries.

Africa contained states before it was colonised by western colonial powers. These states where not confined to fixed boundaries. With the arrival of colonial powers came the concept of the modern state. The modern state ideology opposed the African nation ideology. African nations where territorially based on spheres of influence and found themselves unable too relate to colonial boundaries. (Class notes. ‘European colonies’: 5) Pre-colonisation, Africa was heterogeneous, the modern boundaries brought ethnic divisions.

On a political front, colonial boundaries or today’s boundaries have a huge fault, according to Griggs, “‘nation-building’ is not really achievable in most African countries because nearly every state has deep intrastate ethnic divisions’ (Griggs: 1997). These ethnic divisions result in nations having cultural battles. With so many different cultures competing for dominance it is impossible for cultural unity to occur. By unity being a near impossibility instability has the perfect opportunity to grow and flourish.

The disadvantages in present boundaries are displayed above. What these disadvantages amount from is the frontiers of colonisation. These boundaries have resulted in an inability of African countries to develop, whether it is on a economic, political or cultural fronts. By retaining the present boundary system all countries are at a disadvantage. Even the large countries who have present territorial advantage. They are being held back from controlling international fields because of internal instability. This instability is a direct result of conflicting ideals of the current border situation.

If the borders were impulsively changed in Africa chaos would rain. I do believe some modifications can be made in the current border system, especially in the economic department. I believe all countries should have equal access to international waters. In this case I believe landlocked countries should gain access to ports without being forced to receive harsh tariffs. Africa should begin a slow process of designiying its boundaries through regional integration. This is a slow forgiving process that allows Africa to obtain the best long-term benefits. I believe a new border system can be obtained and be successful in combating many of the disadvantages of the present ‘colonial’ system.