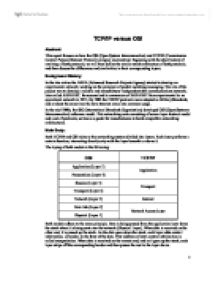 This report focuses on how the OSI (Open System Interconnection) and TCP/IP (Transmission Control Protocol/Internet Protocol) compare and contrast.

This report focuses on how the OSI (Open System Interconnection) and TCP/IP (Transmission Control Protocol/Internet Protocol) compare and contrast. Beginning with the short history of evolving of both protocols, we will then define the similar stack architecture of both protocols, and then discuss the differences and similarities in their corresponding layers.

In the late sixties the ARPA (Advanced Research Projects Agency) started to develop an experimental network, working on the principle of packet switching messaging. The aim of the project was to develop a reliable and manufacturer-independent data communications network, later called ARPANET. Its success lead to conversion of ARPANET from experimental to an operational network in 1975. By 1983 the TCP/IP protocols were adopted as Military Standards, and at about the same time the term Internet came into common usage.

In the mid-1980s, the ISO (International Standards Organisation) developed OSI (Open Systems Interconnection) reference model. This networking suite consisting of seven-layer abstract model and a set of protocols, serves as a guide for manufacturers to build compatible networking architectures.

Physical layer in the OSI model defines the physical and electrical characteristics of the hardware. It transforms binary signals into corresponding signals for the particular transmission media (electromagnetic – wires, flashes of light – fibre optics, etc.). Network Interface Card and modem run at this level. Data Link layer controls the physical layer and provides error-free data transmission from one node to another by framing a binary stream into data frames and retransmission of every frame until acknowledgement from the other end is received.

Network Access layer in TCP/IP replaces Data Link and Physical layers by treating them as one. This layer as well frames the data and sends it over the network.

Because the OSI model was developed before the protocols were invented, it is not biased towards any of them. That makes it a general model. In contrast, the TCP/IP was just a description of already existing protocols. That makes it an applied suite for internetworking. It is relatively simple and reliable and available on virtually every hardware and operating system.