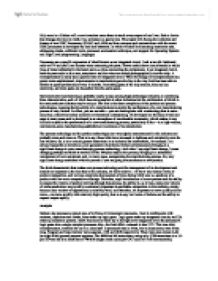 This report will discuss the evolution and history of two RISC Processors, SPARC and ARM and then compare and contrast these with the recent RISC processors as developed by Intel and Motorola.

Only once in a lifetime will a new invention come about to touch every aspect of our lives. Such a device that changes the way we work, live, and play is a special one. This report will discuss the evolution and history of two RISC Processors, SPARC and ARM and then compare and contrast these with the recent RISC processors as developed by Intel and Motorola. In which we shall be discussing instruction sets, addressing modes, arithmetic units, processor acceleration techniques, and support for Operating Systems and High-Level programming Languages.

Processors are a specific expression of what's known as an integrated circuit. Look at an old- fashioned radio or TV and you'll see discrete wires connecting the parts. Newer models have circuit boards in which lines of metal embedded in the board serve as wires connecting the components. In an integrated circuit, both the parts style in this case, transistors- and the wires are etched photographically into the chip. A microprocessor is really just a specific kind of integrated circuit. While the design of microprocessors has grown more sophisticated, improvements in manufacturing are the key to the way Intel has been able to double its speed performance every 18 months. By making parts of the chip smaller, they use less electricity, and more parts can be packed into the same space.

Semiconductor manufacturing is probably nearly unique among high-technology industries in combining three characteristics, each of which has some parallels in other industries but the combination of which in the semiconductor industry may be unique. The first is the sheer complexity of the product and process technologies, meaning that the ability of a manufacturer to predict the performance of a new manufacturing process is very limited.

A year later Intel introduced the 8080. This chip was a step backwards in chip evolution with its 8 bit data bus. The 8080 could process.64 MIPS with its 6000 transistors. The 8080 used 6 micron technology. This chip is worth mentioning primarily because IBM chose to use it in its first personal computer. IBM was able to use the 8088 with existing 8 bit hardware, which was more cost effective. Later IBM began using the 8086 in its newer systems (Rosch, 68).

These modes are real and protected mode. Real mode mimics the operation of an 8086. Protected mode allows multiple applications to be run simultaneously and not interfere with each other (Rosch, 70-71).

In March 1993, Intel invented the Pentium Processor. It ran at clock speeds of 60 & 66 Mhz. These first Pentium processors had 3.1 million transistors, and had a 32-bit data path.

The SPARC and ARM processors are a mere page in the great book of processor history. There will be many new and extremely different processors in the near future. A tremendous amount of time and money have been put into the making and improving of the processor. The improving and investment of billions of pounds are continually going toward the cause of elaborating the processors. The evolution of the processor will continue to evolve for the better until the time when a much faster and more efficient electronic device is invented. This is turn will create a whole new and powerful generation of computers. Hopefully this report has given the reader some insight into the world of these two RISC processors and how they compare to that of CISC architectures developed by Intel and Motrola.