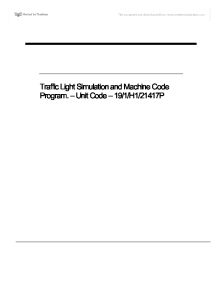 I will be writing be writing a machine code program which controls a set of traffic lights and provides the timing of the light sequence with the 8086 micro-simulator.

I will be using the 8086 micro-simulator to create the traffic light program, the time for this program is provided and the fully working program will be virus check and fully operational.

Part One, the Traffic Light Program

Question One Basic Architecture and Operations of the Microsimulator

Part One, the Traffic Light Program

This is the table that has the timing sequences I will use for the traffic light program: -

; Turn on all the traffic lights.

CPU Clock Speed can be altered.

This simulator enables you to put into practice most of the topics discussed below.

The simulator consists of a central processing unit (CPU), 256 bytes of random access memory (RAM) and 16 input output (IO) ports.  Only five are used.  There is a hardware timer that triggers interrupt 02 at regular time intervals that you can pre-set using the configuration tab. 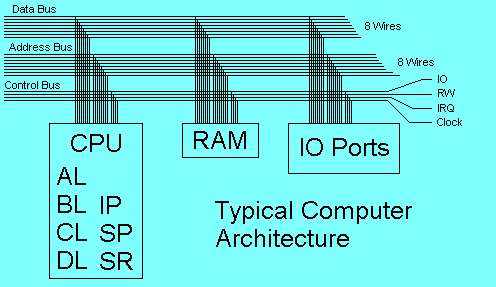 The simulator is programmable in that you can run many different programs.  In real life, the RAM would be replaced by read only memory (ROM) and the system would only ever run one program hard wired into the ROM.  There are hundreds of examples of systems like this controlling traffic lights, CD players, simple games consoles, many children's games, TV remote controls, microwave oven timers, clock radios, car engine management systems, central heating controllers, environmental control systems and the list goes on.

Busses are collections of wires used to carry signals around the computer.  They are commonly printed as parallel tracks on circuit boards.  Slots are sockets that enable cards to be connected to the system bus.  An 8-bit computer typically has registers 8 bits wide and 8 wires in a bus.  A 16-bit computer has 16 bit registers and 16 address and data wires and so on.

compiler. Once the program has been compiled, the resulting machine code is saved separately, and can be run on its own at any time. As with assembly-language programs, updating or correcting a compiled program requires that the original (source) program be modified appropriately and then recompiled to form a new machine-language (object) program. Typically, the compiled machine code is less efficient than the code produced when using assembly language. This means that it runs a bit more slowly and uses a bit more memory than the equivalent assembled program. To offset this drawback, however, we also have the fact that it takes much less time to develop a compiler-language program, so it can be ready to go sooner than the assembly-language program.

An interpreter language, like a compiler language, is considered to be high level. However, it operates in a totally different manner from a compiler language. Rather, the interpreter program resides in memory, and directly executes the high-level program without preliminary translation to machine code. This use of an interpreter program to directly execute the user's program has both advantages and disadvantages. The primary advantage is that you can run the program to test its operation, make a few changes, and run it again directly. There is no need to recompile because no new machine code is ever produced. This can enormously speed up the development and testing process. On the down side, this arrangement requires that both the interpreter and the user's program reside in memory at the same time. In addition, because the interpreter has to scan the user's program one line at a time and execute internal portions of itself in response, execution of an interpreted program is much slower than for a compiled program”.