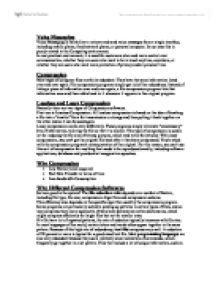 Basically there are two types of Compression softwares.

First one is Lossless Compression. All lossless compression is based on the idea of breaking a file into a "smaller" form for transmission or storage and then putting it back together on the other end so it can be used again.

Lossy compression works very differently. These programs simply eliminate "unnecessary" bits of information, tailoring the file so that it is smaller. This type of compression is used a lot for reducing the file size of bitmap pictures, which tend to be fairly bulky. With lossy compression, you can't get the original file back after it has been compressed.

Voice E-card Version 1 was second software we considered for voice messaging option. In this software you have to save the recorded message. Then you have to use E-card homepage to get the voice card service where you can send recorded message. Problem with this software is that it requires Internet connection for communication process working and also if E-card Website got down due to some reason you are stuck in the way using the voice messaging service. 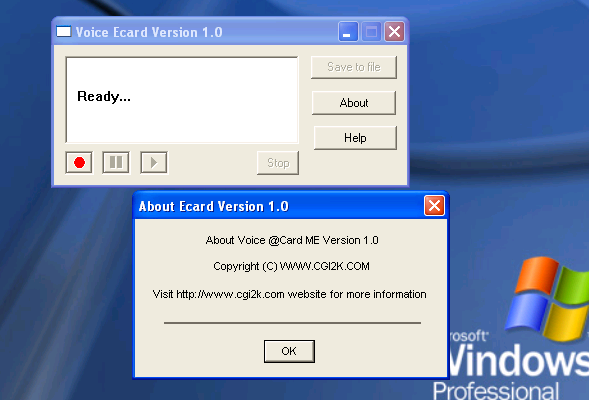 Few Characteristics are shown below for this,

PureVoice is a technology developed by QUALCOMM Incorporated. It is a standard CDMA cellular technology and as well as working with cellular phones, it also works with the email system.

As compared to other common formats such as .wav and .snd for Macintosh, PureVoice technology, when used over the Internet and with Personal Computers, can reduce file sizes and the transmission times of these files by a factor of ten. PureVoice technology compresses an incoming speech signal to its most compact digital signal. This is achieved as follows:

The microphone is used to take in the digitized speech at 64 Kbps as input and this speech is then re-encoded to a lower rate digital bit stream. The voice quality is kept as closest possible to the original PCM. Because the encoding process is adjusted to the incoming speech signal, that is variable speech encoding is used, high voice quality and high compression rate are achieved. 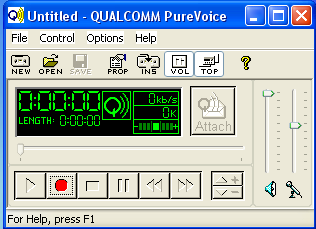 As reported by the company’s website, a file with the .wav format would take up 1MB and more than 7 minutes to transmit using a 28K bps modem. Using the PureVoice technology, the same file would take up only a 100 KB and approximately 45 seconds to transmit over the same modem

Below are some characteristics and Reported metrics about Qualcomm’s Pure Voice,

In order to verify the performance of the software used, an experimental set up was devised.

This was done as follows:

A table below gives a comparison of the file sizes with the each software used.  Each of the files is of duration of 60 seconds.

With the HandyBits software, because of the fact that the resulting compressed file is saved in a

While Pure Voice have two Drawbacks that earlier mentioned in Pure Voice Section.

So our Obvious choice for Voice Messaging Application is HandyBits for reasons provided above.