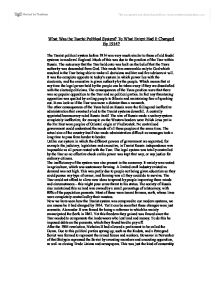 What Was the Tsarist Political System? To What Extent Had It Changed By 1914?

What Was the Tsarist Political System? To What Extent Had It Changed By 1914?

The Tsarist political system before 1914 was very much similar to those of old feudal systems in medieval England. Much of this was due to the position of the Tsar within Russia. The autocracy that the Tsar held onto was built on the belief that the Tsars authority was descended from God. This made him answerable only to God which resulted in the Tsar being able to make all decisions and hire and fire advisors at will. It was the complete opposite to today’s system in which power lies with the electorate, and the executive is given authority by the people. Which means that at any time the legal power held by the people can be taken away if they are dissatisfied with the elected politicians. The consequences of the Tsars position were that there was no popular opposition to the Tsar and no political parties. In fact any threatening opposition was quelled by exiling people to Siberia and maintaining fear of speaking out. It can look as if the Tsar was more a dictator than a monarch.

The inefficiency of the system was also present in the economy. It mainly was rooted in agriculture, which was sustenance farming. A limited craft industry existed as demand was not high. This was partly due to people not being given education so they could pursue any type of career, and farming was all they could do to survive. The Tsar could not afford to allow new ideas to spread by people improving there minds and circumstances – this might pose some threat to his status. The society of Russia also maintained this as land was owned by a small percentage of aristocracy, with 80% of the population peasants. Most of these were tenant farmers, serfs, whose lives were completely controlled by their masters.

Now we have seen how the Tsarist system was compared to our modern systems, we can assess ho it had changed by 1914. Yet it can be seen that these changes were just cosmetic. Alexander II was famed for being a reformer in which he mainly emancipated the Serfs in 1861. Yet this freedom they gained was flawed since the Tsar needed to compensate the landowners who lost land and money.

Universities were controlled severely as the Tsar still feared unrest and new ideas from student organisations. For example in 1861 universities temporarily closed because of student unrest. Secondary education syllabuses were government controlled and restricted mainly to the wealthy as fees needed to be paid.

Censorship was also rife in Russia to further stop the transmission of new ideas to the public. Alexander III strongly increased censorship after the assassination of his father. He formed a secret police, the Okhrana and led a drive to ‘Russianify’ the country. This involved anti-Jewish pogroms and moving people to certain places in the country.

In conclusion it is clear that the Tsarist system was on a slippery slope. The Tsars knew from other countries experience that autocracy would crumble. I think that Alexander II tried to reform the system to bring the country up to date yet retain autocracy. However it could not happen as censorship made people uneducated and stopped the industry progressing. I think the Tsars after him tenuously held onto power by controlling the population in every aspect of life yet they tightened their grip so the country burst into revolution.