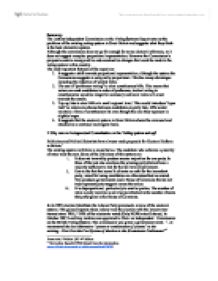 Why was an Independent Commission on the Voting system set up?

The Jenkins Independent Commission on the Voting Systems Report sets out the problems of the existing voting system in Great Britain and suggests what they think is the best alternative system.

Although the commission does not go far enough for some electoral reformers, as it does not suggest complete proportional representation. However the Commission’s proposals contain many positive and constructive changes that could be made to the voting system in this country.

The most important features of the report are:

1.Why was an Independent Commission on the Voting system set up?

Politicians and Political Scientists have always made proposals for Electoral Reform in Britain.[1]

The existing system in Britain is majoritarian. The candidate who achieves a plurality of votes wins the seat.

Under this system the majority of MPs (80-85%) would continue to be elected on a Constituency basis. The Alternative Vote would be used to elect MPs. Instead of marking a ballot paper with an X to elect their favourite candidate, the voter would rank candidates in order of preference (1 for their first choice, 2 for their second until they no longer have a preference). If no candidate gets over 50% of the vote, the bottom candidate is taken away and his or her votes are redistributed to the voters’ second choice. This process would continue until one candidate gets over 50%. The rest would be elected on a Top-up basis (this refers to the “+”) this would reduce the disproportionality, which is inherent in FPTP. The Top-up would be based on the second vote, which could be for a party or a candidate. The votes would be counted and would elect MPs from a Regional List (The Regional List would be of MPs belonging to the various parties). The number of MPs that are elected from each party’s List would be proportional to the percentage of the vote the party gained in that region.The system would be implemented in all areas of the UK.The Regional Top-up regions would be small. This would be in the interests of local accountability and would provide MPs with a broad constituency link.
...read more.

If the system were effective it would also make the political system in Britain more accessible for smaller parties, for example the Liberal-Democrats and the Green Party. They would be able to benefit from the top-up system and people would be more inclined to vote ideologically as wasted votes are reduced by AV+.

The Commission’s Report also makes the important suggestion that the voting system is reviewed and checked on a regular basis by an Independent Commission to make sure that it is effective and efficient. This would hopefully mean that the system could be adapted (if needed) continually so that it remains suited to Britain as the political system evolves.

It is important to note that although the Commission’s report is seen as a step towards reforming the voting system, in Britain four years after the report the Labour government has not implemented it.

Some reformists also believe that the system of AV+ is a mediocre alternative and the only real alternative to First Past the Post is to have fully proportional system.

The Report of the Independent Commission on the Voting System. (1998) Website

[2] The Jenkins Report (1998) Extract from the Introduction

[3] The Report of the Independent Commission on the Voting System. (1998) Chapter 9. www.official-documents.co.uk/document/cm40/4090