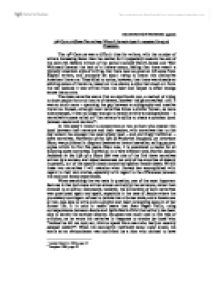 EXAMINATION NUMBER: 45002 19th Century Slave Narratives: When Literacy doesn't necessarily equal Freedom. The 19th Century was a difficult time for writers, with the number of writers increasing faster than the market for it (especially towards the end of the century). Several writers of the period (notably Henry James and Walt Whitman) berated the lack of a literary canon, feeling that there wasn't a typically American style of writing, that there was too great an influence from English writers, and promptly set about trying to create this distinctive American literature. They failed to notice, however, that there was already an existing canon of literature, based on true events; a style that stood out from the rest because it was written from the heart and helped to effect change across the country. The slave narrative was at first an abolitionist tool, a method of trying to show people the cruel nature of slavery, however the genre evolved until it was so much more - spanning the gap between autobiography and creative literature. Indeed, although most narratives follow a similar format, as more tales emerged, it was no longer enough to remain strictly autobiographical - a narrative's success relied on "the narrator's ability to create a common bond between reader and narrator"1. In this essay I intend to concentrate on two authors who created this bond between their narrators and their readers, with narratives that to this day remain the amongst the most widely read - and startlingly individual - slave narratives. Narrative of the Life of Frederick Douglass, an American Slave, was published in 1845 and became an instant bestseller, selling 30,000 copies within its first five years. ...read more.

As most narratives follow a very strict pattern, there was only so much room for manoeuvre within the blueprint, and as much as they were writing for a cause, "they were readers and self conscious producers of narratives that were intended as literary works of art - as autobiographical acts performed as much in the service of literary posterity as on behalf of a contemporary mass of enslaved Afro-Americans."10 Whilst Douglass' manuscript mostly follows this set pattern, Incidents in the Life of a Slave Girl broke the narrow boundaries completely, with the issues that she highlighted, and the particular brand of cruelty she showed the world. In the first instance, it was quite rare for a female ex-slave to publish her story - despite escaping to the predominantly anti-slavery North, she still had to face the same gender bias (African-American women were "strongly encouraged to adopt the attributes of piety, purity, domesticity and submissiveness that characterized the nineteenth century ideal of 'true womanhood.'"11) At the time there was still "a bias against women speaking in public or even publishing their idea in antislavery publications,"12 so Jacobs faced a huge amount of opposition to write her story. Then, when it came to her finding a publisher, she was told that for her work to be published, she would need Harriet Beecher Stowe, Nathaniel Parker Willis, or Lydia Maria Child to write the preface and act as editor - only one of these prominent figures would be able to vouch for the truth in her words, as she was not likely to be believed. The fact that Jacobs does bring up issues regarding sexual exploitation and oppression is only one reason why it stands out from other Narratives - although these themes did raise much opposition to the text, which L. ...read more.

Due to the passing of Fugitive Slave Bill, the North and South became almost the same regarding slavery - you may escape from one to the other, but you still remain hunted, and legally a slave until your freedom is bought. Jacobs at least shows some incredulity that even to be free, she must be sold from one party to another: "So I was sold at last! A human being sold in the free city of New York!"21 Even though she was not bought for her services, but rather just to remain free for the rest of her life, it seems that this freedom is somewhat tainted: ownership does not tie her to Mrs. Bruce, however she still professes that "Love, duty, gratitude also bind me to her side. It is a privilege to serve her who pities my oppressed people,"22 Even though she is free, she still considers herself to 'serve', despite it being under wholly different circumstances. There is no doubt that literacy played an important part in the whole process of the escapes of Douglass and Jacobs: it planted the seed of hope of a better life, helped them to achieve that better life, and then enabled them to help others left behind by raising the profile of the cruelty of slavery, and proving that intelligence is not dependant on skin colour. However, it was also a means for the abolitionists to entrap them with narratives of a copybook structure. The racism they faced, was aided in some circles by their ability to read and write, but in others the prejudice ran too deep to combat. They technically achieved freedom, but at the price of being indebted to someone. Douglass wrote that literacy was his "pathway to freedom."23 It may have been a pathway, but it led not to freedom but the rocky road of a complicated future. ...read more.