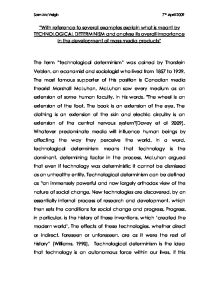 "With reference to several examples explain what is meant by TECHNOLOGICAL DETERMINISM and analyse its overall importance in the development of mass media products" The term "technological determinism" was coined by Thorstein Veblen, an economist and sociologist who lived from 1857 to 1929. The most famous supporter of this position is Canadian media theorist Marshall McLuhan. McLuhan saw every medium as an extension of some human faculty. In his words, "The wheel is an extension of the foot. The book is an extension of the eye. The clothing is an extension of the skin and electric circuitry is an extension of the central nervous system"(Dovey et al 2009). Whatever predominate media will influence human beings by affecting the way they perceive the world. In a word, technological determinism means that technology is the dominant, determining factor in the process. McLuhan argued that even if technology was deterministic it cannot be dismissed as an unhealthy entity. Technological determinism can be defined as "an immensely powerful and now largely orthodox view of the nature of social change. New technologies are discovered, by an essentially internal process of research and development, which then sets the conditions for social change and progress. Progress, in particular, is the history of these inventions, which 'created the modern world'. ...read more.

John Walters had become convinced that through the advances in printing and audience demand he could make a profit from printing the news daily. In 1896 the first moving picture show took place in London to a paying audience. It then took another forty years for technology to progress to a level that allowed audience to see full length talking films to be broadcast. In 2009 we now have the technology and wealth to be able to view films that can last for three hours or more and that are now a hybrid human action and computer generated graphics such as the star wars films. In 1946 cinema attendance reached its peak of 635 million visits in Britain. This could be a combination of new technological novelty and the fact that we had just come out of a six year war and people were still in need of new ways to unwind. Nowadays people still go to the cinema to see new films; however, you can now wait a few months to see the same film available to rent in your home or even broadcast into your living room via your television set. In 1936 the BBC launched its television service in Britain. It broadcast live images from Alexandra Palace. This was followed by further test transmissions during the following two days. ...read more.

Viewers and listeners can be on safari in Africa one minute and with the flick of a switch be experiencing life in another time in history and a little later they could be floating amongst the stars in a science fiction film. Conversely this can also isolate people from social interaction with other people as we all sit mesmerised by the wealth of entertainment available to us within our own homes. As digital television has evolved and the idea of being able to watch what you want, when you want, media provision will become more competitive and become more available to all. The negative side to this is that because media technology is continuously evolving new technologies will become available at an increasingly rapid rate. These new technologies when first launched are inherently expensive and are out of reach of all but the very rich in society. Most people will have to wait sometimes years to be able to afford to access these new services. Finally, the evidence would suggest that although the media will always be reliant on technological evolution to provide new transport streams for its products, technological development is also reliant on the consumer buying already existing technologies and media products to fund the research and development of new technology. Although the different theorists support their arguments it would appear that technology and the media has a more symbiotic relationship than TECHNOLOGICAL DETERMINISM would suggest. ...read more.