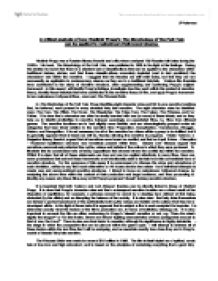 A critical analysis of how Vladimir Propp&amp;#146;s The Morphology of the Folk Talecan be applied to mainstream Hollywood cinema.

A critical analysis of how Vladimir Propp's The Morphology of the Folk Tale can be applied to mainstream Hollywood cinema. Vladimir Propp was a Russian literary theorist and critic whom analysed 100 Russian folk tales during the 1920's. His book, The Morphology of the Folk Tale, was published in 1928 in the light of his findings. During his studies he found that there is a standard set of classifications that can be applied to the characters within traditional fantasy stories, and that these classifications accurately depicted (and in fact predicted) the characters' role within the narrative. I suggest that his theories are still valid today, but that they are not necessarily as applicable to contemporary cinema as they are to a traditional fairytale. Various film theorists have contributed to the study of narrative structure, often supplementing and confirming Propp's original framework. In this essay I will identify Propp's findings, investigate how they work within the context of narrative theory, identify those theorists that have contributed to the narrative theory of film, and apply Propp's framework to two mainstream Hollywood films; Jaws and The Princess Bride. In The Morphology of the Folk Tale Propp identifies eight character roles and thirty-one narrative functions that, he believed, were present in every classical fairy tale narrative. The eight character roles he identified were; The Hero, The Villain, The Donor, The Dispatcher, The False Hero, The Helper, The Princess, and Her Father. It is clear that a character can often be easily branded with one (or more) of these labels, and so they help us to identify similarities in narrative between seemingly un-associated films, i.e. films from different genres. The narrative functions are in fact slightly more flexible, and are chronologically grouped under six categories that bear direct relation to the narrative flow; Preparation, Complication, Transference, Struggle, Return, and Recognition. It is not necessary for all of the narrative functions within a group to be fulfilled, but it is generally apparent that at least one will be, thereby allowing the narrative to progress. ...read more.

Within the Return category, again only one function is fulfilled - The Hero returns. It seems that the Recognition category is indeed fulfilled within the narrative (The False Hero/Villain is exposed), but not in the order required by Propp's classic narrative structure, and so The Princess Bride can ultimately be seen as incompatible with Propp's defined narrative functions. There are two possible reasons for this 're-structuring'; 1) The inherent differences present within the two narrative mediums (film or oral based) mean that there is a possibility of the narrative being altered to best fit the form of production. For example, the time-based nature of film often requires certain sub-plots, or indeed narrative functions, to be removed or trimmed before production to maintain a smooth transition from one format to the other e.g. the removal of a narrative category extraneous to a cinematic story, such as Recognition. As a result it has proven necessary for an entirely new set of narrative functions to develop within cinema, with each genre accumulating a specific set of roles and functions during its development. Whilst Propp's set of character roles/narrative functions may be directly applicable to oral based narrative formats, there will be flaws if his structure is applied to others, such as those of cinematic or literary origin. However, despite these shortcomings it seems that The Princess Bride (as film) utilises many of the characteristics outlined by Propp. This suggests, then, that there is a 'universal' structure throughout all narratives, which must be edited according to the codes and conventions of the format within which it is being produced. Hence, it is fact the process of film-making that affects the adherence to Propp's structure, rather than a conscious ideological decision on the part of the film-makers themselves. 2) The Princess Bride was originally published in 1973 by author William Goldman. The interesting fact concerning the book's origins was that Goldman only credited himself as 'editor' of the book, which was supposedly the work of a fictitious fairytale author known as S. ...read more.

Hence, I suggest that these character roles and narrative functions are gradually lost or accumulated, through the transition of narratives from one format to another. This means that Propp's narrative structure, whilst ideally suited to identifying similarities between traditional folk tales, is conversely inappropriate for application to mainstream Hollywood cinema. Although The Princess Bride actually follows Propp's narrative structure quite closely, it seems that the only reason that it does this is because it is in fact a fairytale narrative. This suggests that his narrative structure is certainly sound within the context of the fairytale, but shows flaws if applied to most other narratives. Whereas Todorov's Equilibrium - Disruption - Restored Equilibrium structure is clearly present throughout almost all narratives of both oral and cinematic origin, Propp's is in fact confined to the fairly restrictive narrative structure present in the fairytale. This makes it highly unsuitable for application to anything other than a 'classic' fairytale narrative, or indeed most narrative formats other than those of oral origin. It seems that the only way to conclude this essay is by saying that narrative structures appear not to be fixed, but alter over time. This can be directly linked to McConnell's theory of the genre cycle. It is perhaps accurate to say that fairytales are not subject to the stages of the genre cycle in the same way that other narratives are, explaining their seemingly 'timeless' nature. The only possible reason for this is that they are oral based, and so not recorded in a permanent form as film or literature is. Instead, the nature of the folk tale is such that is a 'hereditary' gift, accumulating new characteristics as it is passed down from generation to generation. Hence the fairytale narrative is less susceptible to deviation than many others, ironically as it is always in a state of change, and so not subject to same pattern of narrative development as many other narrative formats such as film or literature. ?? ?? ?? ?? JP Adamson ...read more.

There is some fine detailed analysis that grapples with a fairly well chosen range of theory here, and the essay's structure is quite good, inasmuch as the argument proceeds in a logical way that is easy to comprehend and leaves out nothing glaring.

The choice of a critical analysis rather than a straight application of Propp's theories is ambitious and the author makes a real attempt to fulfill this promise, with a small degree of success.

Unfortunately, the argument itself is undermined by a literalistic approach to the theorists categories that often leads the author into error, and the essay as a whole is weakened by the lack of proper reference or bibliography.