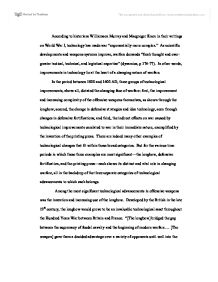 According to historians Williamson Murray and Macgregor Knox in their writings on World War I, technology has made war &quot;exponentially more complex.&quot;

According to historians Williamson Murray and Macgregor Knox in their writings on World War I, technology has made war "exponentially more complex." As scientific developments and weapons systems improve, warfare demands "fresh thought and ever-greater tactical, technical, and logistical expertise" (dynamics, p 176-77). In other words, improvements in technology lie at the heart of a changing nature of warfare. In the period between 1000 and 1600 AD, three groups of technological improvements, above all, dictated the changing face of warfare: first, the improvement and increasing complexity of the offensive weapons themselves, as shown through the longbow; second, the change in defensive strategies and idea technology, seen through changes in defensive fortifications; and third, the indirect effects on war caused by technological improvements unrelated to war in their immediate nature, exemplified by the invention of the printing press. There are indeed many other examples of technological changes that fit within these broad categories. But for the various time periods in which these three examples are most significant-the longbow, defensive fortification, and the printing press-each shows its distinct and vital role in changing warfare, all in the backdrop of the three separate categories of technological advancements to which each belongs. Among the most significant technological advancements in offensive weapons was the invention and increasing use of the longbow. Developed by the British in the late 13th century, the longbow would prove to be an invaluable technological asset throughout the Hundred Years War between Britain and France. ...read more.

But in fact, these were far outnumbered by battles of siege warfare. The sites of the sieges were primarily castles, and had to be fortified strategically as defensive strongholds. The changing architecture at the sites of the sieges represents the second form of the impact of technology on warfare, the concept of strategic, and in this case primarily defensive, technology. The fortification of castles and fortresses in preparation for siege warfare was the most important strategic technology in the most common form of warfare-the siege. While it is true that siege fortification, like the longbow, is a physically constructed technology of warfare, it should in fact be put in a separate category. Siege fortifications should be considered closer to a strategic technology, based on ideas and tactics, and not a technological weapon. It should be put in the same category as, for instance, battlefield formations-both are tactical strategies of war based on ideas. As technology and weapons improved, siege warfare improved. In response to this, important castles and fortresses began to enhance their defenses. It was essentially an arms race, competing for which technology would prove superior-the offensive siege or the defensive fortification. Beginning even before 1000 AD, the fortifications were built to be increasingly more stable and able to defend themselves against new forms of the opposition's technology. Two common fortification setups were the ringwork and the motte-and-bailey. The ringwork was a simple fortified enclosure of earth and timber, which usually surrounded one or two major buildings. ...read more.

By being able to read printed materials, values changed among individuals, and religious beliefs were strengthened. This deep passion for religion, which was the central issue of warfare in the 16th and 17th centuries, never could have arisen without the technology of the printing press. The mindset behind war is a form of warfare, and the printing press caused the religious zeal that would be necessary for religious war to take place. The printing press was indeed a technology that dramatically affected warfare-it made people capable of fighting. In the 21st century, the increasing advancements of technology have an even greater influence on warfare than ever before. Looking at weapons alone-from the longbow to the gun to the nuclear missile-technology in warfare is constantly improving. But is this necessarily a good trend? As technology improves, skill becomes much less of a factor than ever before. The more advanced the technology becomes, the less skilled one needs to be to use it. Also as technology improves, the capability for destruction grows. Today, the pushing of a button can erase the majority of the world. So it seems the increase in technology over time has resulted in less skill necessary among people in war, as well as more possibilities for destruction. While we look at history and seem to value the strides in technology and its effect on warfare, maybe we should not cherish these advancements so dearly. Technological advancements in warfare, in fact, have virtually no positive effect on war, other than to beat the other guy. The crossbow may have beaten the French at Crecy, but in reality, it was yet another unfortunate step in the wrong direction. ...read more.