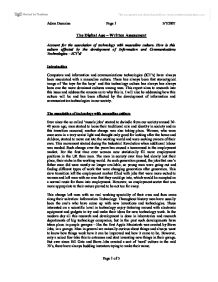 Account for the association of technology with masculine culture. How is this culture affected by the development of Information and Communications Technologies - ICT's?

The Digital Age - Written Assessment Account for the association of technology with masculine culture. How is this culture affected by the development of Information and Communications Technologies - ICT's? Introduction Computers and information and communications technologies (ICT's) have always been associated with a masculine culture. There has always been that stereotypical image of 'the toys for the boys' and this technology culture has always has always been one the more dominant cultures among men. This report aims to research into this issue and address the reasons as to why this is. I will also be addressing how this culture will be and has been affected by the development of information and communication technologies in our society. The association of technology with masculine culture Ever since the so called 'muscle jobs' started to dwindle from our society around 30-40 years ago, men started to loose their traditional role and identity in society and as this transition occurred, another change was also taking place. Women, who were once seen in a very sexist light and thought only good for looking after the home and children, started to move out into the working world and were seeking careers of their own. This movement started during the Industrial Revolution when additional labour was needed. Such change over the years has caused a turnaround in the employment market. For the first time ever women now statistically fill more employment positions in the UK than men. The men in society over time had slowly lost their place, their niche in the working world. As each generation passed, the jobs that one's father once did were mostly no longer available, so young men were going out and finding different types of work that were changing generation after generation. ...read more.

Such a culture however, has always been present but not as prominent. Men have always been eager to try out new things and new technologies such as the first computers, calculators and hand held electronic devices due to it being in their nature. As time has progressed this masculine technological culture has become more and more prominent in society due to the increasing speed of the development of technologies. 40 years ago new technologies were around but were not as abundant as they are today. The world in which we live today is abounds with all sorts of new wonderful technologies and equipment that not only feeds this culture on a social and entertainment basis, but also helps us get along better with life and operate more efficiently in business and as a society etc. because the technology that we use is shaped by ourselves. For I believe it is us that shapes technology and not the technology that shapes us, because history will tell us that a new technology or piece of equipment that does not sell well will become obsolete. If we are introduced to a piece of technology that we think will not be useful then we won't buy it and it will not be popular, therefore it is our own needs that direct the route in which new and future technologies take. However, this is not to say that new technologies do not affect us. They have a massive influence in the way we live our lives and we can do things that people would not dream possible 50 years ago. ...read more.

It will take time for those not as interested in such things to become accustomed to them, let alone new technologies not yet available such as Third Generation Mobile Phones and all-in-one home entertainment and communication systems that incorporate the Internet, TV, interactive TV, video phone, DVD and music collections. There is a technology overlap where it takes time for people not that interested in technology to become accustomed to new things and just as they start to become accustomed, more new things come out and they have to start all over again, whereas people in the masculine technology culture are early adopters of technology and keep up-to-date all the time. With this overlap, I see there always being room for such a culture. There will always be people who grasp new technology first and use it within their social group and as a part of their culture. The development of new technologies will initially feed the masculine technology culture but they will then gradually make their way into a more popular culture like DVD machines are doing at the moment. Conclusion For as far as one can imagine, there will always be new up and coming technologies and as long as this is the case, there will always be particular groups of people who will be both aware and interested in new and developing ICT's. Such interest will always create a place for a masculine technology culture because for the foreseeable future, it will always be those in this culture who are the early adopters of technology, who will then use it as they wish in a similar way that we see today. ...read more.