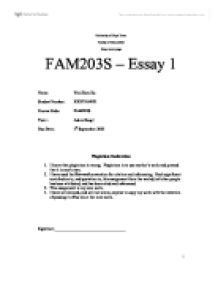 African news article in terms of journalistic bias, objectivity, a balance of perspectives

University of Cape Town Faculty of Humanities Essay cover page FAM203S - Essay 1 Name: Yan Zhen Xu Student Number: XXXYAN001 Course Code: FAM203S Tutor: Adam Haupt Due Date: 5th September 2005 Plagiarism Declaration 1. I know that plagiarism is wrong. Plagiarism is to use another's work and pretend that it is one's own. 2. I have used the Harvard convention for citation and referencing. Each significant contribution to, and quotation in, this assignment from the work(s) of other people has been attributed, and has been cited and referenced. 3. This assignment is my own work. 4. I have not allowed, and will not allow, anyone to copy my work with the intention of passing it off as his or her own work. Signature:____________________________________ A news article published on the 22 June 2005 was found on an African news website, www.afrol.com. The subject of this news article is based on Phumzile Mlambo-Ngcuka, the new deputy president of South Africa. This news article will be textually analyzed below with the aid of an international news article found on www.bbc.co.uk of the same subject. The international news article will only be used to aid in positioning and pin pointing the African news article in terms of journalistic bias, objectivity, a balance of perspectives, 'spin doctoring', and/or image management. The essay will detect the presence of these aspects because a journalist is supposed to be object when delivering news to the public. "Intent doesn't matter. The news consumer receives damaged goods if reporting isn't fair" (Seib, P, 1994: 15). If a journalist fails to attain an objective point of view, the journalist might be viewed as incompetent. ...read more.

She has also been in the spotlight for a questionable loan given to her brother". The staff writers used the adjective 'questionable' to describe her behavior. Phumzile Mlambo-Ngcuka's action cannot be explained by anyone. There is no one that can be held accountable for that statement. It could easily be passed off as the staff writers trying to cover up her actions because they feel strongly towards her. Furthermore, the use of the word 'claimed' also adds to this. Therefore the staff writers are putting their opinions forward about the matter they are writing about. As mentioned earlier, in order for a journalist's statement to be valid, they must include quotes from authoritative others. By including statements from the authoritative others, the journalist is validating her journalistic statements. This validation of statements therefore increases the authentic value of the staff writer's statements and the readers are more likely to believe what the journalist has written. So the journalist does subsequently strive to achieve an objective point of view. But in regards to a balanced account of debate, journalists lack in possessing that characteristic of objective journalism. This is because there is not equal amount of space given to Jacob Zuma as there is for Phumzile Mlambo-Ngucka, and Bulelani Ngucka is not even mentioned in the African news article. Pearce on the other hand, has included the facts of Bulelani Ngucka's involvement of Jacob Zuma's downfall: "Her husband, Bulelani Ngucka, is the former chief prosecutor who initiated an investigation into the financial affairs of sacked former Deputy President Jacob Zuma - the man she replaces". All parties involved should be given an equal chance or space to voice out their opinions about the matter at hand. ...read more.

It shows that he is a serious and determined man who knows what he wants. In conclusion what the analysis was trying to prove is that most if not all articles have, to some extent, a degree of bias. This is because of the kinds of bias's that have been identified and the assumption or 'reality' that there is no real 'objective truth' out there. For example if two people viewed an accident together at the same time, they will have different stories to tell, this is mainly because of cultural background and experiences. These aspects are what result in ideological bias, which is regarded as unintentional and hidden. Reference List: 1. Blumber, J, G and Gurevitch, M, The Crisis of Public Communication, 11 New Fetter Lane, London: Routledge, 1995. 2. Claus, M, The Politics of Communication, Oxford University Press: New York, 1973. 3. McNair, Brian, Party Political Communication II: Political Public Relations' in An Introduction to Political Communication, London: Routledge, 1995. 4. Pearce, J, 2005, BBC news [Online]. Available: http://news.bbc.co.uk/2/hi/africa/4120168.stm [28/08/2005]. 5. Seib, P, Campaigns and Conscience in The Ethics of Political Journalism, Praeger Publishers, 88 Post Road, Westport, Ct An Imprint of Greenwood Publishing Group, Inc, 1994. 6. Severin, W and Tankard, J, Theories of Persuasion' in Communication Theories: Origins, Methods and Usese in the Mass Media, New York: Longman, 1992. 7. Sontag, S, Chapter 3 in Regarding the Pain of Others, Penguin books: London, 2003. 8. Staff writers, 2005, Afrol News [Online]. Available: http://www.afrol.com/articles/16644 [28 August 2005]. 9. Street, J, Political Bias and Watchdogs or Lapdogs? The Politics of Journalism in Mass Media, Politics and Decomcracy, New York: Palgrave, 2001. 10. Perrone, V, 1994, Building Language Art Skills [Online]. Available: www.teachervision.fen.com/page/6402.html [30 September 2005]. ?? ?? ?? ?? 1 ...read more.