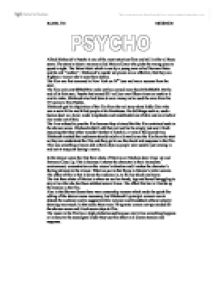 Alfred Hitchcock's Psycho is one of the most notorious films and still is after all these years. The story is about a woman called Marion Crane who picks the wrong place to spend a night. The Bates Motel which is run by a young man called Norman Bates and his old ''mother''. Hitchcock's murder set-pieces are so effective, that they can frighten a viewer who's seen them before. The film was first screened in New York on 16th June and was a success from the start. The film only cost $800,000 to make yet has earned more than $40,000,000. By the end of its first year, Psycho had earned $15 million-over fifteen times as much as it cost to make. Hitchcock also had ideas to save money as he used the crew from his TV series to film Psycho. Hitchcock got his inspiration of the film from the real story about Eddie Gein who was a serial killer and killed people at his farmhouse. ...read more.

In that scene there were 78 separate camera set-ups needed for the shower scene and it took seven days to film. The music in the film has a high pitched sound because every time something happens or is about to the sound gets louder they use this effect as it creates tension and suspense. Film Shot What you see in the frame Effect it has First three shots of Marion * Medium Shot * Close Up * Extreme Close Up Marion's initial scream Draws the audience in to feel her shock and terror Last three shots of Marion Hands, Legs and herself struggling Tells the audience she is struggling and dying The face of the Killer are in a row The killer is getting closer when he is stabbing It builds up the tension Shots 13 to 25 Stab-scream Stab-scream Stab-scream Builds fear creates shock A point of view shot is a short scene in a film that shows what a character is looking at. ...read more.

By using extreme close up on money which is being compared with a wider angle of Marion's shot, the director wants us to be aware of the characters mixed emotions. When we see the character looking at something we wonder what the character is looking at. That creates suspense. We then are given a chance to see what the character saw and then see the reaction of the character again. There were three effects of repetition in Psycho: * Develops Character * Builds Suspense * Links up the narrative{story} Hitchcock planned every part of Psycho long before the filming began. To give a film a story shape a director may often include repetition, events, themes or even objects that keep turning up. Psycho is full of such repetitions which are often a helpful way of discovering the deeper meanings of a film and Psycho is no exception. An example of repetition in the film is when both Marion and Arbogast see the crow in Norman's parlour they both feel scared. ?? ?? ?? ?? RUHEL 10I MS SINGH ...read more.