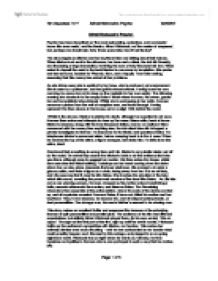 Alfred Hitchcock's 'Psycho' Psycho has been described as 'the most astounding, audacious, and successful horror film ever made', and its director, Alfred Hitchcock, as 'the master of suspense', but, perhaps we should ask, forty-three years later, has it had its day? The story begins as Marion and her boyfriend Sam are talking about their futures. When Marion is at work in the afternoon, her boss and a client, the rich Mr Cassidy, are discussing a large transaction, involving the sum of forty thousand dollars. When asked to deposit the cash in the bank Marion is overcome by temptation. She packs and leaves home, headed for Phoenix, Sam, and a happily-ever-after ending, assuming that this money has solved all her problems. As she drives away she is spotted by her boss, who is confused, yet unconcerned. She is seen by a policeman, and her guilt is almost evident. Having found her one morning, he warns her not to sleep on the roadside for her own safety. The following evening she checks in to the empty Bates' Motel where Norman, the owner, greets her and immediately takes interest. Whilst she is undressing in her cabin, Norman removes a picture from the wall of reception area, and looks through. Having replaced it he then returns to his house, set on a slight hill, behind the motel. Whilst in the shower, Marion is stabbed to death, although her assailant is not seen. Norman then enters and attempts to clear up the mess. Mean while, back at home Marion's absence, along with the forty thousand dollars, has been realised. ...read more.

As an audience, we notice it and we are sure we are about to witness something special. The chilling title, 'Psycho' emerges on to the screen and then dramatically splits in to shattered pieces, representing the dual personalities and shorelines in the film. These lines then cleverly dissolve into the first establishing shot, of a skyscraper, panning around the cityscape. We are told where, on what date, and at what time the proceedings commence, with the precision so unnecessarily accurate that it is convincingly real. All the information we are give is perfectly acceptable, so why should we not believe it as the whole truth? In this trivial way, Hitchcock begins to reel us in to his trap, of convincing us that this film world is unmistakably real, and that the events, which occur inside it, are perfectly capable of happening outside it. Therefore, when we are shocked at the disastrous slaughter of our innocent heroine, we are left to desperately pick up the pieces of our shattered illusions, and consider if this could happen to those around us. Convincing the audience of the reality of the film let Hitchcock mould their conceptions, develop sympathies and build up identification between them and fictional characters. This hugely increased the despair and shock, the feeling of loss even, when a character is brutally murdered. Straight away, Hitchcock begins to build up our sympathies for Marion Crane. He uses several cinematic techniques to create an effective mise-en-scene. Mise-en-scene is everything that a viewer can see within a certain frame, and is comprised of many aspects. For instance Hitchcock uses a high-angle, mid range establishing shot to place Marion in her context, and highlight her innocence and vulnerability. ...read more.

We are even convinced of the well being of mother until the very end, by clever use of voice over. The whole plot keeps us guessing, so when the final shot of Norman under guard at the police station - talking as though it were mother - morphs into Mrs. Bates preserved skull, it is even more startling. Dramatic irony is also interestingly entwined with the plot. On many occasions characters unknowingly comment on the situation in a very unfortunate style. The traffic cop suggests Marion should spend the night at a motel 'to be safe' when in fact she is murdered there. Norman counters that 'a boy's best friend is his mother' when Marion inquires about his social life - or apparent lack thereof. Although this can not be fully appreciated by the audience at the time when it is heard, with the power of hindsight it is possible to see the significance of each individual comment. Having come away from viewing the film shocked and harassed, a viewer then contemplates what they have witnessed, and has time to fit all the pieces together. This adds to the experience, and to our appreciation of the play as a whole. Personally I am inclined to agree with aforementioned title attributed to Alfred Hitchcock, as I truly believe he is the master of suspense. No one could have constructed a film so complete in every aspect that it was more than a story - rather an experience. An experience to shock, to provoke, to question even the basic morals and reality of human society. 'Psycho' is as relevant to day as ever, and has retained the power it had over its audience the very first time it was viewed. Tim Saunders 10 Y Alfred Hitchcock's Psycho 02/05/07 Page 1 of 5 ...read more.