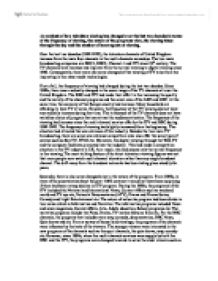 An analysis of how television viewing has changed over the last two decades in terms of the frequency of viewing, the nature of the programs view, the viewing times through the day and the number of hours spent on viewing.

An analysis of how television viewing has changed over the last two decades in terms of the frequency of viewing, the nature of the programs view, the viewing times through the day and the number of hours spent on viewing. Over the last two decades (1980-2000), the television channels of United Kingdom increase from the main four channels to the multi-channels nowadays. The two main broadcasting companies are BBC1, BBC2, Channel 4 and ITV since 19th century. The TV channels have increase and improve from the normal viewing to digital viewing since 1990. Consequently, there were also some changed of the viewing of TV arise from the improving in the mass-media technologies. First of all, the frequency of viewing had changed during the last two decades. Since 1980s, there was a radically changed in the cover range of the TV channels all over the United Kingdom. The BBC and ITV had made their effort in the increasing the quality and the variety of the channel programs and the cover area of the AHF and UHF. At the same time, the economy of the Europe country had increase. Many household are affording to have TV at home. However, the frequency of the TV viewing did not have any radically increase during that time. ...read more.

Often the expected gratifications were not forthcoming: stories were often criticized for not giving the participants what they wanted. Cognitive balance theorists argue that people avoid dissonant information - information that conflicts with their existing knowledge, attitudes and feelings or which they find disturbing or threatening. 'They seek out information that is reassuring and congruent with their beliefs' (p. 130). Graber's study showed some limited evidence for this theory. The participants often (but not always) rejected information that they found annoying or disturbing. And when the issue had become obtrusive both supportive and contradictory information tended to be rejected. However, sometimes people did adjust their beliefs in response to discordant information. According to agenda-setting theories, people accept guidance from the media in determining what information is important. Media cues include frequent coverage and prominence. Media cues often influenced the attention paid by the participants to news stories, although they did not guarantee attention. 'Media agenda setting, to the degree that it does take place, is a powerful force in determining which problems are taken seriously and in providing the context within which policies and individuals will be judged' (p. 133). However, people ignore media cues when their minds are already made up, when they doubt the arguments presented or when the information is disturbing. Consequently, the people only watch the TV when they intend to watch. Reference Consumer Psychology for Marketing. G. Foxall and Ronald E. Goldsmith 1994. Routledge. ...read more.